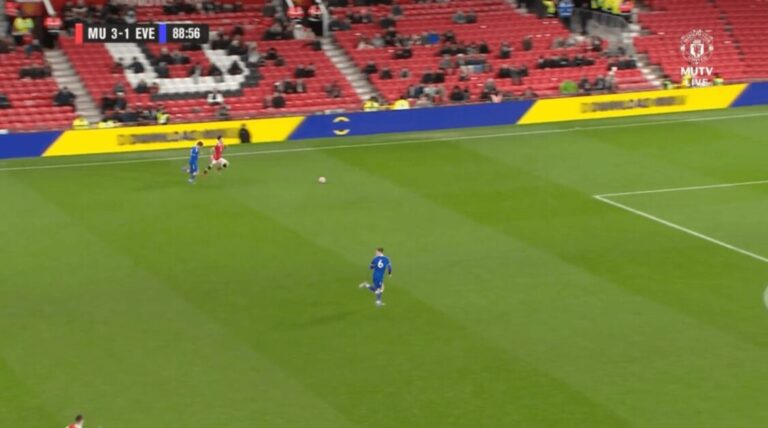 Alejandro Garnacho announced himself as the latest potential superstar from the Manchester United academy with a wondergoal on Wednesday night.

Alejandro Garnacho is only 17 but has already shown enough in his short career to have United fans purring at the potential talent on this talent.

The Spaniard could be another Cristiano Ronaldo in the making as he is exceptionally skilled when it comes to dribbling and blazing past opponents.

A goal on Wednesday night best showed this ability and had social media buzzing.

The goal is the kind of effort every player dreams of scoring.

Leading 3-1 against Everton in the 89th minute of the FA Youth Cup fifth round, United cleared from a corner. Instead of sitting back and defending, Garnacho decided to sprint after the loose ball.

Try as they might, the Everton players could not keep up with the 17-year-old.

Despite having run the length of the Old Trafford pitch, Garnacho shows composure to steady himself in the box. With poise and balance, he shifts the ball onto his right, fakes a shot then scores at the near post.

He then whipped off his shirt in celebration.

The solo effort was made more impressive because it was so late in the game, yet the Spaniard had the energy to pull off such an excellent goal.

The sublime solo effort brought another classic goal to mind: Gareth Bale’s blitz for Real Madrid against Barcelona in the Copa del Rey final in 2014.

It is not the first time Garnacho has given a glimpse of his dribbling ability. He also scored after a mazy dribble that started from the halfway line in an U23 win over Blackburn in December.

He cost United a reported £400,000 but could be soon worth a lot more than that if he continues to impress.

Playing as a forward, he tends to play on the left of a front three in a style similar to Ronaldo and Gareth Bale.

As a right-footed player, he loves to cut in and challenge defenders with his dribbling ability.

He has featured heavily in both the UEFA Youth League and the Premier League 2 this season and has seven goals in 21 appearances across all competitions.

Garnacho has also played for Spain having represented them at the U18 level. He debuted for the Spanish youth side in September 2021 in a 3-0 win over Turkey.