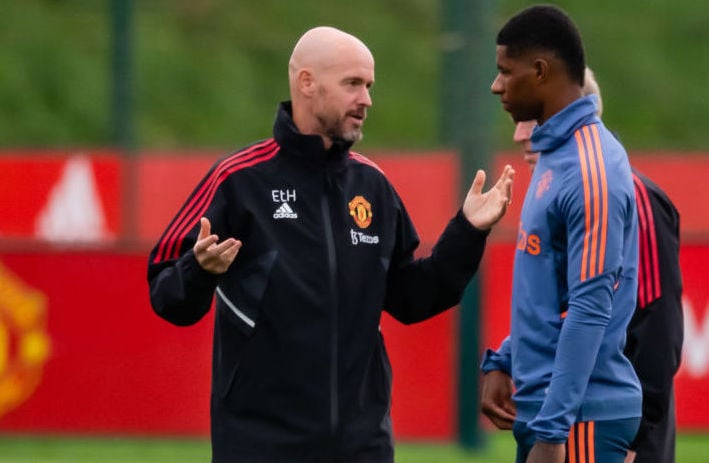 In the aftermath of Man United’s horrific defeat to Brentford, Marcus Rashford reportedly made Erik ten Hag aware that he has the potential to turn the club’s season around.

Having lost 4-0 to The Bees on August 13, it looked like the club’s season was over before it had even begun. So with a cloud hanging over Old Trafford, fans feared the onslaught of rain that looked destined to send their Premier League hopes this term into ruins.

However, under the guidance of their new Dutch manager, they overcame the odds and defeated arch rivals, Liverpool. Prior to the fixture, Ten Hag reportedly held crisis talks with the squad. In the knowledge that his squad needed a mental boost, he sat them all down and gave them some words of encouragement.

The 52-year-old outlined the strategy he wants the players to implement going forward. But more importantly, he gave each and every squad member a chance to voice their opinion as well.

According to The Sun, the forward asked why the boss had not played him as a centre forward, as he had been promised during pre-season. In response, Ten Hag said he would honour that promise. This resulted in the gaffer giving Rashford his opportunity against Liverpool, which more than paid off.

The 24-year-old broke free and scored a fantastic goal to send the United fans into raptures. Therefore, it looks likely that Ten Hag will continue to play him in this position as the campaign wears on, as long as Rashford performs well enough.

This decision brings Cristiano Ronaldo‘s future at the club into further question. The Portuguese icon was dropped to the bench against the Reds, coming on to the pitch as a late substitute.

However, with Rashford seemingly nailing down the number nine spot for the foreseeable future, Ronaldo may find himself struggling to get back into the team. This could result in the former Ajax manager cutting him loose. Furthermore, it could solve a big problem for United in determining who is their lead centre forward this season.