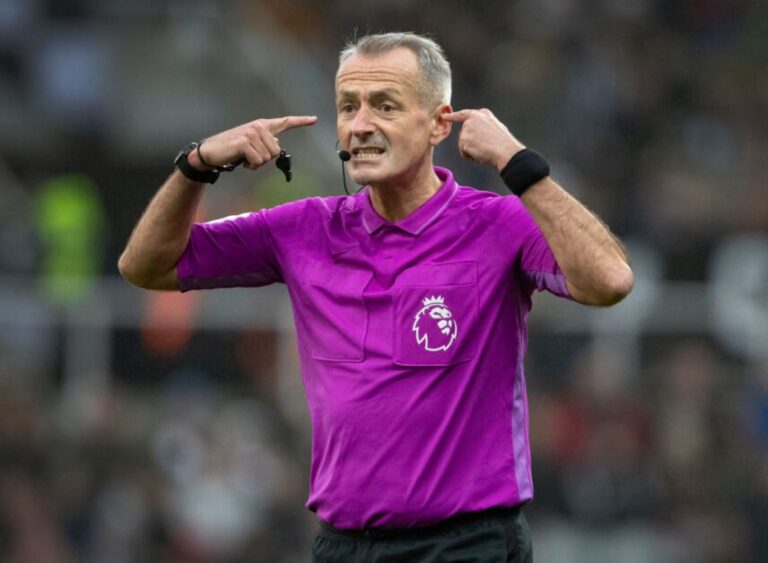 Premier League referee Martin Atkinson recently revealed the best and worst player that he has officiated, claiming the worst player “scared him to death”.

The 51-year-old is hanging up his whistle at the end of this season. His retirement, alongside fellow refs Mike Dean and Jon Moss, signals English football’s change in direction to using younger referees.

Following refereeing, Atkinson will take up a role at Professional Game Match Officials Limited (PGMOL). He will coach the Premier League referee pool, with Moss managing the group. Atkinson will be able to use all the experience from his long career in officiating in his next job.

Taking charge of his first match in 2004/2005, Martin Atkinson has been a mainstay official for the last seventeen seasons. His debut, a 2-1 Manchester City win over Crystal Palace, was an eventful start to his career. Atkinson gave a penalty for each side and dished out four yellow cards along the way.

Since then, the Yorkshireman has officiated nearly 460 Premier League matches. He has branded 67 red cards in his career, with a staggering 1482 yellow cards handed out too.

Like most top-ranked officials, Atkinson’s career is not just confined to the Premier League. He has been the man in the middle for games in the Champions League, Europa League, Euro 2016, and even World Cup qualifiers. His total appearances currently stand at 757, with 2504 yellow and 101 red cards in total.

Reflecting on his long career, the Yorkshireman recently revealed his worst and best players to officiate.

In a Q&A session for ‘If U Care Share’, a charity that supports families affected by suicide, the referee admitted that his most challenging player to officiate was former Everton defender Alan Stubbs.

Speaking about Stubbs, Atkinson was humorously candid. “He would kick anything that moved, was hard as nails and scared me to death when I first got on,” said Atkinson (as per The Mirror).

“He was just so tough to referee that it was like, impossible. I learned a lot from that – you learn how to manage players.”

Despite his ominous description, Stubbs often managed to steer clear of the referee’s notebook. In 256 career appearances, the defender was booked 21 times and only sent off once.

As a man who oversaw nearly 500 Premier League games, Martin Atkinson, of course, had a favourite too.

“I’ve been lucky that I’ve got on with the vast majority of players, but one that stands out is Tomas Rosicky,” shared the Yorkshireman. “I always got on really well with him. We just pleasantly got on, not best mates or owt like that, but he was always really respectful.”

Atkinson then told the audience another fun fact. Rosicky’s last club, Sparta Prague, invited Atkinson to referee the Czech’s retirement game. Clearly, the pair had a deep mutual respect for one another.