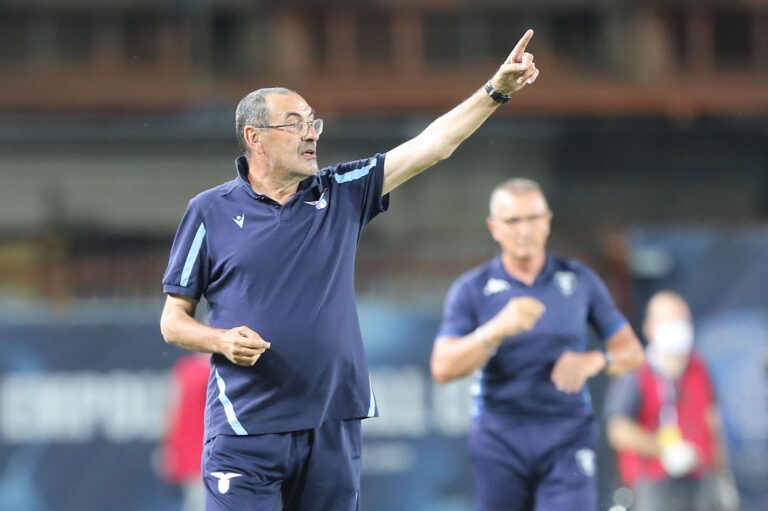 Lazio manager Maurizio Sarri has spoken out on his opinion of transfer talk in the media – saying it “does [his] head in”.

Sarri was speaking after his new side defeated Empoli 3-1 in their opening game of the Serie A season.

Sergej Milinkovic-Savic, Manuel Lazzari and Ciro Immobile all got on the scoresheet as Lazio came back from 1-0 down to win.

The signing of Pedro in particular made headlines, due to his move across the Roman divide from fierce rivals Roma.

Lazio were unable to sign players up until August 19 due to a transfer embargo.

The club had signed five players earlier in the summer, but were unable to register them due to the embargo.

A report from Football Italia stated that Lazio president Claudio Lotito had to personally put an extra €10 million into the club.

With the embargo now lifted, there has been fresh speculation over players that the club could bring in.

Lucas Torreira has courted interest from three Serie A clubs, with Lazio believed to be one of them.

Transfer talk, though, is clearly something Sarri isn’t a huge fan of.

Speaking after the win over Empoli, he said: “All this transfer talk does my head in, there’s nothing more dull than that.

“This is a sweeping statement but people are so used to hearing you, the media, talk about transfers that you now think they actually enjoy it.”

He also said: “To me, speaking about transfer market is boring.

“Pedro was one of the players we talked about during the summer, then we had the opportunity to sign him and we took that opportunity.”

Lazio are next in Serie A action on Saturday when they take on Spezia.

Ravel Morrison training with Derby ahead of Man United clash