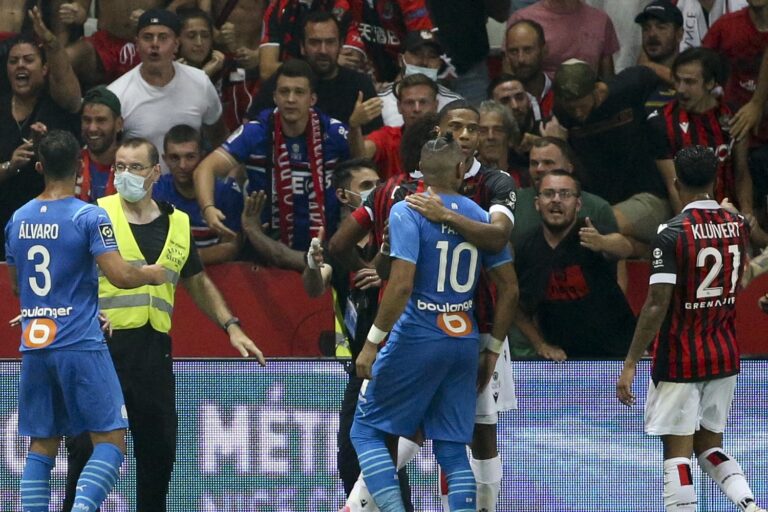 Marseille players have shown off the injuries they sustained during last night’s Ligue 1 pitch invasion.

In one of the craziest scenes the French top tier has seen in many years, the derby day clash between Marseille and Nice ended in dramatic fashion on Sunday in a mass brawl incident. It began after Dimitri Payet was struck by a bottle that came from Nice fans in the stand, at which point Nice were actually 1-0 up with just 15 minutes left to play. This then descended into further anarchy when a parade of supporters swarmed onto the pitch to create a serious security threat that was subsequently handled after a great deal of uncertainty.

Nice came out with the attention of restarting the game not too long after they’d returned to the dressing room but their opponents, Marseille, didn’t feel comfortable going ahead – ensuring that the fixture was abandoned.

Payet was clearly upset with what had happened as anyone would be, but as it turns out, he wasn’t the only victim as Luan Peres and Matteo Guendouzi both had strangulation marks on their neck in photos taken after the altercation.

The images were released onto social media and can be seen below.

Many of the supporters who were involved have been identified as “ultras” of the Nice fanbase, which could lead to some kind of prosecution and potentially even a fine for the club as a whole.

Marseille aren’t innocent in this with one of their backroom staff being videoed striking a Nice fan in what was an evening to forget for French football.