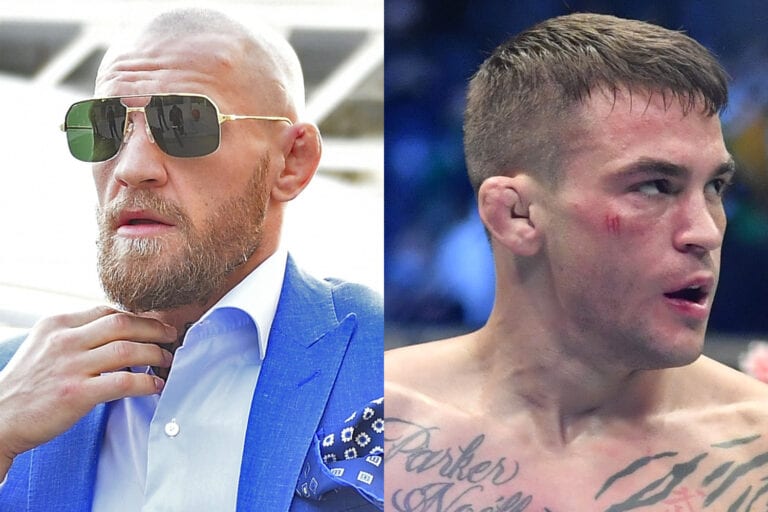 Conor McGregor has claimed his proposed July 10 fight against Dustin Poirier is off after Poirier revealed McGregor never sent his promised $500,000 charity donation.

In the build-up to their UFC 257 showdown, McGregor announced that he’d donate a sizeable fee to The Good Fight Foundation.

However, when the Irishman recently predicted that he’d finish Poirier in the fourth round of their trilogy fight, Poirier shared the revelation that Conor’s payment never actually went through.

Responding to that, McGregor says the donation hadn’t been made as his team had received no assurances of where and what the money would go towards.

A donation, not a debt. We’ve been awaiting the plans for the money that never came. I do with all my donations. Know where it’s going dot for dot. Otherwise it goes walking. As is the case with a lot of these foundations, sadly. You took the McG over the belt shows I was right.

100% never a debt. You offered, we accepted, and like I said your Team never responded to our emails regarding the process of where funds would be put to work! July 10th you will taste defeat yet Again https://t.co/k3Cu9DG1Me

Beyond being a public spat, the disagreement appears to have had big consequences when it comes to the much anticipated trilogy fight between the two.

My team does their due diligence to make sure every donation meets the mark. My generosity is known. You will pay with your brain for this attempt at smearing my name. Shooting ass shelling ass bitch. Little bitch kicks from a shell. Good luck when you’re caught. You’re fucked.

This bitter development will come as quite a surprise given that, just a few months ago, they seemed pretty friendly with one another.

McGregor did say there would be “no more Mr. Nice Guy” heading into the summer, but they probably didn’t expect it to get this bad.

Now, fans are left to sit and wait to see what’s going to happen next. The UFC lightweight title picture is locked up with Michael Chandler fighting Charles Oliveira for the strap, but Poirier could be left empty-handed if McGregor sticks to his guns and walks away from the fight.

If it goes ahead then the build-up is bound to be far more bitter than anyone could’ve anticipated, which for the UFC, could be a great development in terms of PPV buys.