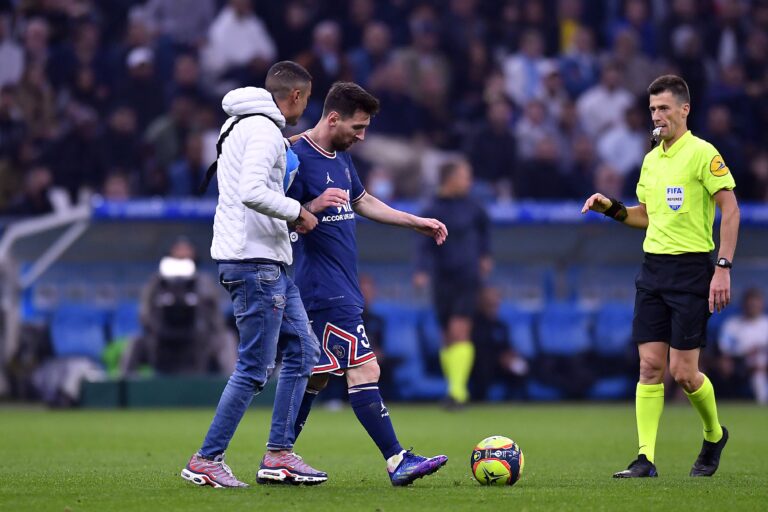 Lionel Messi was approached by a pitch invader whilst in possession of the ball for Paris Saint-Germain in their Ligue 1 fixture against Marseille on Sunday.

The Argentinian was embarking on a dribble towards the area when a member of the crowd got onto the playing area and began following him around the pitch.

Messi spotted the man as he approached. He was then forced to stop play as security personnel rushed on to intervene.

The pitch invader could then be seen being dragged off before play resumed.

But that wasn’t the only incident involving spectators during the match. Neymar had to have police protection whilst taking corners, due to the fact that fans were throwing bottles and other missiles onto the pitch.

It was a difficult night for Mauricio Pochettino‘s side at the Stade Velodrome.

They thought they were ahead through Luan Peres’ own goal early on in the first half. However, VAR ruled it out for an offside.

Defender Achraf Hakimi was then shown a straight red card on 57 minutes. PSG failed to register a shot on target in the second half as the game ended 0-0.

Their lead at the top of Ligue 1 has been closed to seven points after second-placed Lens defeated Metz 4-1 at home. PSG are next in action on Friday when they take on Lille at Parc des Princes.

In other Ligue 1 news, Saint-Etienne’s match against Angers was delayed after fans threw flares onto the pitch.

Saint-Etienne are currently managed by former Southampton and Leicester boss Claude Puel. They have recorded five points and no wins from their opening 11 games, and consequently sit bottom of Ligue 1.

They did, however, come back from 2-0 down to draw 2-2 against Angers. Ex-Sunderland man Wahbi Khazri got his name on the scoresheet.