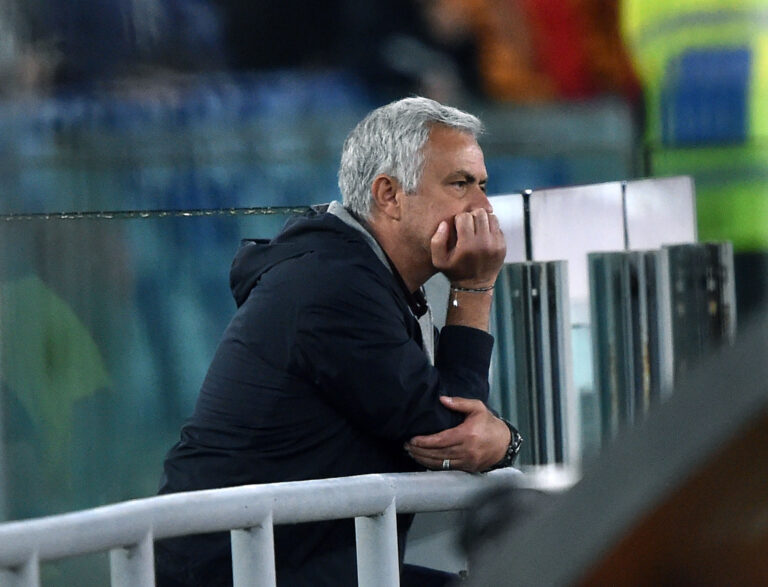 Roma manager Jose Mourinho was sent off for the second time this season in Serie A during his side’s 0-0 draw with Napoli – one of four managers to be sent in off in the division over the weekend.

Roma were looking to bounce back after a shock 6-1 defeat to Norwegian side Bodo/Glimt in the Europa Conference League on Thursday, and were able to extend their unbeaten home run in Italy’s top division this season.

The result keeps Roma in fourth place in Serie A, with the four sides directly behind them – Atalanta, Juventus, Fiorentina and Lazio – all failing to win.

After being shown the red card on 80 minutes, Mourinho nodded his head before responding with a thumbs up towards referee Davide Massa.

He explained to DAZN (quotes via Football Italia) after the match: “I wasn’t happy about the referee’s decision, but I didn’t say a word. Nobody is going home happy, both coaches were sent off, but I think the referee was balanced.”

Spalletti, meanwhile, said he was “devastated” about being sent off.

Atalanta boss Gian Piero Gasperini was sent off during his side’s 1-1 draw with Udinese. He claimed to Sky Sport Italia (via Football Italia) after the match that he had “no idea” why he was booked and added that referees are “really a problem”.

And Inter Milan boss Simone Inzaghi was shown a red card for his reaction to the awarding of a late penalty to Juventus in the two sides’ eventual 1-1 draw. That means four of the managers of Serie A’s top seven clubs will be forced to miss the next game.