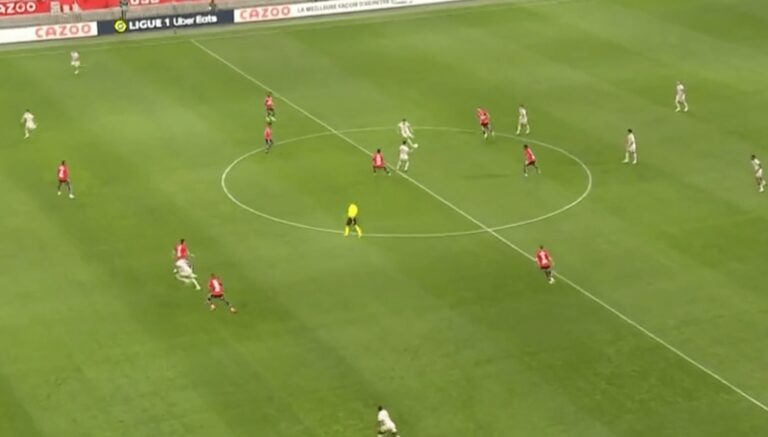 The insanely speedy start kicked off an absolute rout as the Parisiens put Lille to the sword. Following his assist, Messi got himself on the scoresheet to double PSG’s advantage. He casually rolled the ball into the bottom corner from a Nuno Mendes cut-back.

The reigning champs then put the game to bed before half-time thanks to the third point of their three-pronged attack. Neymar provided an assist to Achraf Hakimi to make it 3-0, before grabbing a goal himself to make it 4-0 at half-time.

The break did little to quash the Brazilian’s appetite for goals, as Hakimi turned provider for Neymar to grab his second of the game on 52 minutes.

Mercifully, the hosts responded with a goal of their own. Jonathan Bamba managed to bundle the ball home for his first goal of the season. However, after this, the match continued to go downhill for Lille.

With the home side still pushing forward to try and scrape back some goals, PSG’s front three had a lot of room to operate. As a result, Neymar managed to find Mbappe on two occasions, with the Frenchman completing a hat-trick. The Parisian’s dominant 7-1 win maintains their perfect start to the Ligue 1 season.

Despite there being seven PSG goals to choose from, the clear pick of the bunch was the astounding opening goal that came in near record-breaking time.

In this instance, the quarterback was none other than pass master Lionel Messi. Following a couple of intricate passes between the midfield, Neymar laid the ball back to the Argentinian.

Messi then clipped a perfectly weighted through ball to the speedy Mbappe, who had got in behind the Lille defence thanks to his vertical “running route”. Not to be outshone by the incredible Messi assist, Mbappe lifted the ball over the keeper to score a fantastic lob.

This brilliantly executed play appears to have come straight off the training ground. The PSG players certainly enjoyed it, at least. All the outfield players jumped in a group hug celebrating their blistering start.

With the goal, Lionel Messi got his second assist of the season, while Mbappe grabbed the first goal of his hat-trick that night. But did they set the record for the fastest Ligue 1 strike?

Currently, it appears that Mbappe has managed to equal the fastest-ever goal in Ligue 1 history. He has definitely scored the fastest goal since Opta started tracking this stat, though, since 2006/07.

However, the mercurial Frenchman shares the record with a strike from 1992, per the Guinness World Records. Caen player Michel Rio also found the net after eight seconds in a game against Cannes 30 years ago.

Using a similar kick-off tactic to PSG, Rio ran over the top to get on the receiving end of a lofted through ball. He then produced a brilliant volley that sailed over the Cannes keeper’s head.

Sporting News even claim that Rio’s would be faster if both strikes were timed down to milliseconds. But, as it stands, Mbappe and Rio both share the record.