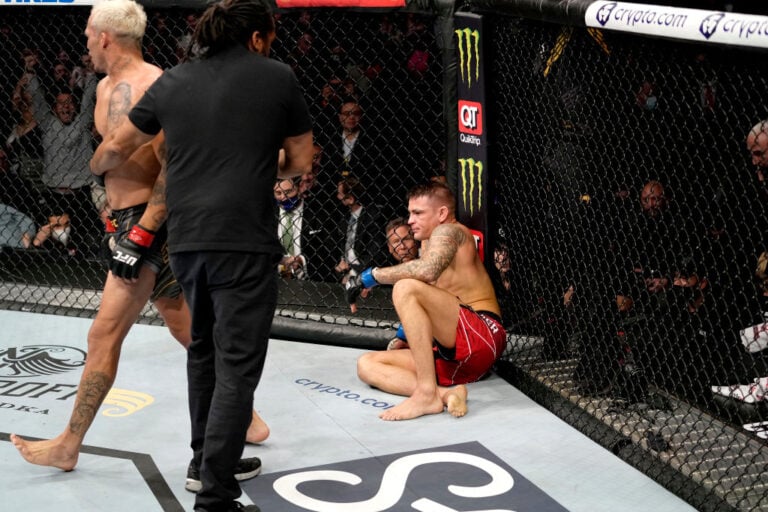 UFC 269 was a tough night at the office for Dustin Poirier. The lightweight fighter had a shot at the title, facing off against reigning champion Charles Oliveira.

A promising first round for Poirier saw him rattle the Brazilian with a procession of punches to the head. A stat popped up on the screen when the bell went saying that Oliveira had landed 29 head strikes. Poirier connected with 56.

Yet that didn’t tell the whole story.

Oliveira, a compact and versatile fighter comparable to a Swiss army knife, hurt Poirier from close quarters. The damage he did to Poirier was in the body, hitting his opponent with fierce knees in the torso.

The damage Poirier took to his body affected his output in the second round, which Oliveira dominated. ‘Do Bronx’ controlled ‘The Diamond’ on the mat from top position, dropping vicious elbows that connected with Poirier’s jaw several times. The Louisana native needed to assert himself in the third round.

When they stepped away from their corners, Poirier looked winded.

This state compelled the sprightly Oliveira to shoot for a takedown. However, Poirier resisted the pull of Oliveira. So the Brazilian decided to climb on his back instead, locking in a standing rear-naked choke to make Poirier tap.

Few fans would have wished a miserable night on Poirier. He showed his true character throughout 2021 by maintaining dignity during bitter battles with Conor McGregor. His behaviour endeared him to UFC fans and fighters alike.

If there was one fighter you would expect to show sympathy, it was probably Michael Chandler. He was the last man to go up against Oliveira, falling short in their vacant UFC lightweight title fight at UFC 262.

On that night, Oliveira won by TKO.

Chandler didn’t receive an immediate rematch, and a subsequent unanimous decision loss to Justin Gaethje at UFC 268 knocked him further down the pecking order. This skid may explain Chandler’s strangely salty tweet in reaction to Poirier’s defeat.

He wrote: “I would never ever quit… I went out on my shield after being separated from consciousness, congrats to Oliveira… #UFC269.”

Effectively bragging about getting knocked out, Chandler is inferring that he’s more of a man than Poirier because of it. It was not the kindest or most self-aware tweet Chandler ever composed.