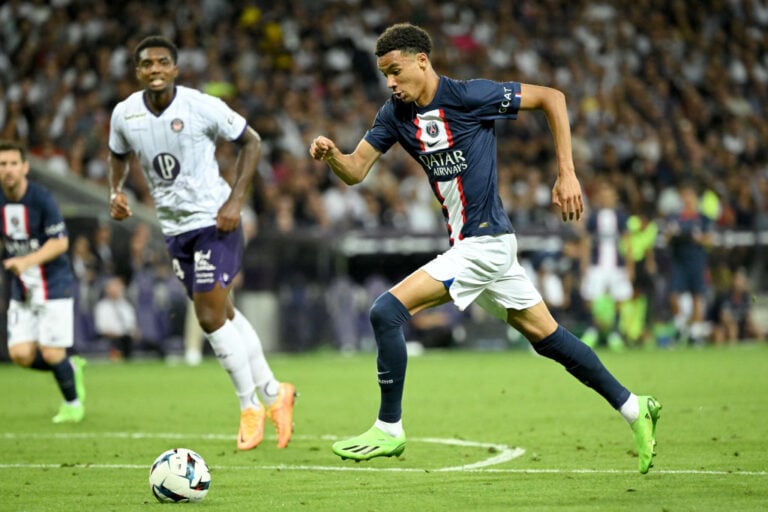 One of PSG’s summer signings has received a massive +15 upgrade on their previous card for FIFA 23.

The ratings for all Ligue 1 players became available last weekend, as part of EA’s build-up to their new game. Rather than letting gamers find out ratings once they have FIFA 23, EA have released player cards in phases.

This has led to many discussions as the gaming giants make their annual adjustments to stars’ ratings for the game. For Ligue 1, though, the main talking point is the domination of one team at the top of the rankings.

PSG have 12 of the 15 highest-rated players in the French top division – a sign of just how dominant their squad is. The Parisians cover the top seven places before Monaco’s Wissam Ben Yedder comes in at an 84.

Kasper Schmeichel, now of Nice, is 83-rated, and joint-eleventh in the top 15. Finally, Kevin Volland is the only other non-PSG player. He is 82 overall and thus fills out the rankings.

Paris Saint-Germain also possesses the player with the biggest overall upgrade on FIFA 23, thanks to Hugo Ekitike.

The French youngster has seen his player rating fly from 61 overall on FIFA 22 to 76 on the upcoming game. As a result, Ekitike’s Ultimate Team card has gone from bronze to gold, too.

Firstly, his pace and physical have minor improvements. Ekitike’s speed goes up five ratings (69 to 74). Meanwhile, his physical has a +3 boost.

The most major card differences are in the shooting and dribbling stats, though. For FIFA 23, Ekitike’s shooting has gone from 59 up to 75. Similarly, EA upgraded his dribbling from 60 last year, to 76 this year.

His overall +15 boost makes him the most upgraded player on the upcoming FIFA. Just behind him is Southampton’s Tino Livramento, who got a +14 increase on his card. Then, Stade Rennais defender Warmed Omari is third after getting a +13 boost.

Finally, Ekitike’s PSG teammate, Vitinha, and Lazio’s Nicolo Casale round out the top five with +12 upgrades.

This significant FIFA 23 upgrade for Hugo Ekitike is fully justified after his impressive 2021/22.

At just 19 years old, the forward showed what sort of potential he had with a strong Ligue 1 campaign. In 24 league appearances for Stade de Reims, Ekitike found the net ten times, plus notched four assists.

An unfortunate hamstring injury sidelined the Frenchman for ten games. Therefore, he may have managed even more goals with extra matches. Despite this, his performances garnered attention from a number of clubs this summer.

Newcastle United appeared close to making a deal with Reims for the youngster in June, after missing out on Ekitike in January. However, both attempts fell through.

PSG then came calling, signing Ekitike on loan in July. This transfer also comes with an option to buy.

Ekitike has had limited game time in Paris due to PSG’s star front three. All of his five appearances have come from the bench, with the forward seeing just over an hour of action in total.

He will hope to make his first start when the fixtures really begin to pile up ahead of the World Cup. For now, though, Hugo Ekitike can enjoy his status as the most-upgraded FIFA 23 player at the time of writing.