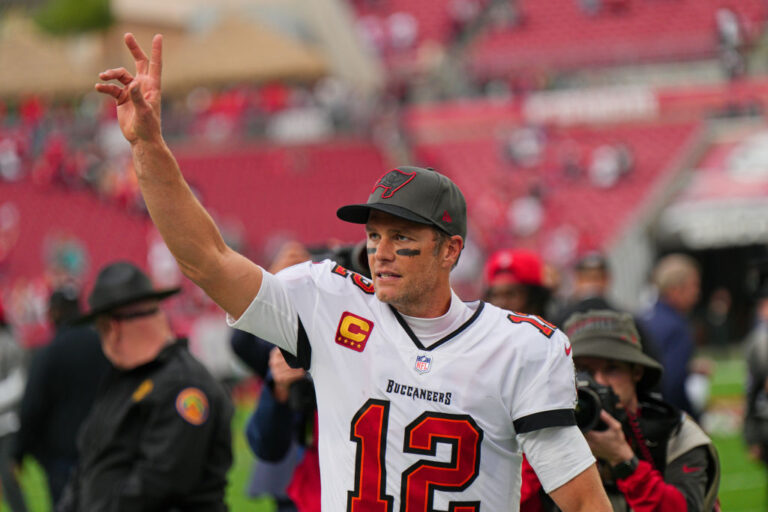 NFL star Tom Brady is nearing the end of his highly successful career in the sport – but that doesn’t mean he isn’t keeping his fitness levels extremely high.

The 44-year-old is one of the most decorated athletes in any sport. He is a seven-time Super Bowl champion, and a five-time winner of the Super Bowl MVP award.

Brady was best known for his 19-year spell with the New England Patriots, where he won six Super Bowls. In 2020, he signed with Tampa Bay Buccaneers.

Away from the NFL, Tom Brady has made several appearances on television programmes. In addition, he also runs his own peak performance business, titled TB12Sports.

The American is very keen on fitness, and in an occupation as physically taxing as an NFL player, keeping in peak condition is an absolute must to achieve success.

Tom Brady shows off physique, calls out The Rock

Brady is currently on set for the upcoming film, ‘80 for Brady‘. The sports comedy film is centred around a road trip involving four friends to the 2017 edition of the Super Bowl. During the real-life event, Brady’s side came back from 28-3 down to win 34-28. They broke the record for the largest Super Bowl comeback.

Whilst on set, Tom Brady decided to show his physique to his 11.9 million Instagram followers, and also called out Hollywood star and WWE Hall of Famer The Rock in the process.

He wrote: “The exact moment Tom Brady “went Hollywood” on the 80 For Brady set.

“PS @therock, I’m free until August if you need help with any stunts in the meantime.”

Brady will be back in NFL action when the 2022 season kicks off in September. It will be his 22nd active season.