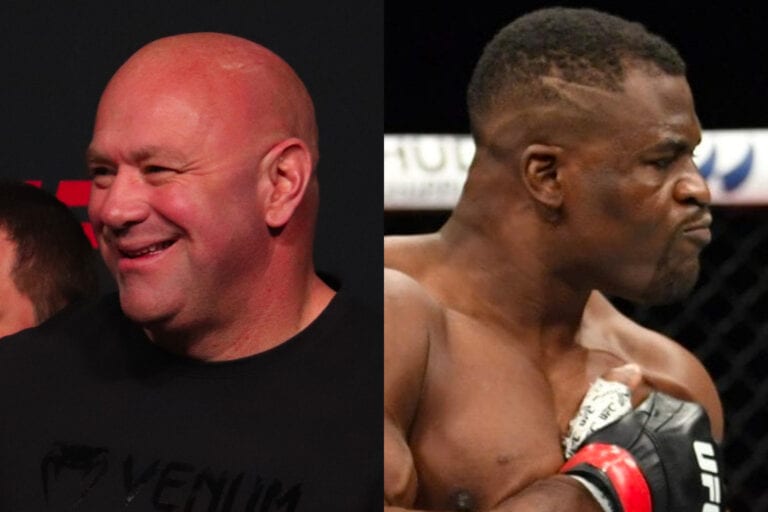 Ngannou, who won the belt from Stipe Miocic back in March, had been tipped to defend it against Lewis at UFC 265 in August. However, it came out a few days ago that it’d likely be pushed back to September as the timing didn’t really work for ‘The Predator’.

Then, in a bizarre twist of fate, it was revealed that Lewis will now battle Ciryl Gane for an interim championship with Ngannou being left to wait on the sidelines.

As you can imagine, Ngannou wasn’t all too happy about this development.

I remember my interim title fight against Jairzinho …. oh wait ?

“I remember my interim title fight against Jairzinho …. oh wait” he wrote on Twitter.

Ngannou is referring to the fact that many fans were calling for his fight against Jairzinho Rozenstruik in May 2020 to be turned into an interim bout due to the inactivity of champion Stipe Miocic. Instead, Ngannou tore through Rozenstruik to secure his fourth consecutive knockout win before waiting 10 months to receive his title shot.

There’s definitely been a shift in mentality from Francis Ngannou in recent months since his big win over Miocic and unfortunately for the fans, that seems to have created some friction between the champion and UFC president Dana White.

It falls in line with Jon Jones also having some issues with the company, and it raises a few question marks regarding whether or not we’ll ever actually get to see Jones fight Ngannou for the strap.

Either way this UFC heavyweight division is as stacked as it has been in a long time and even though Gane only just fought last weekend in his win over Alexander Volkov, the Frenchman is seemingly ready to climb back in there on August 7 to battle Derrick Lewis in Houston.