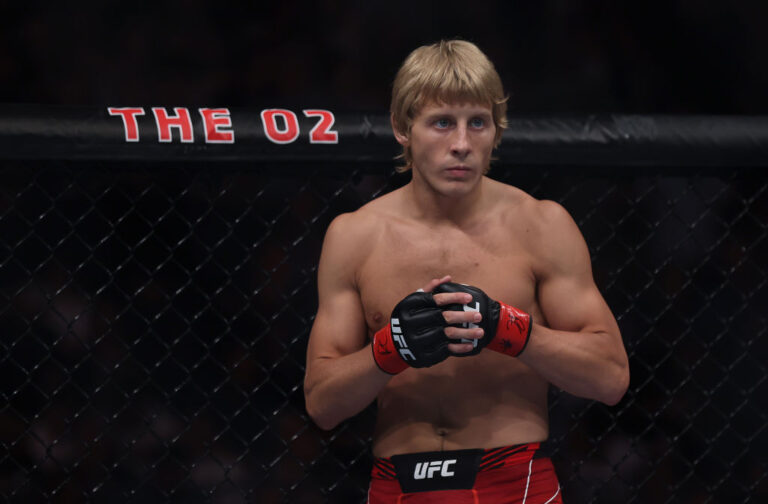 Paddy Pimblett received widespread plaudits following his victory at UFC London when he dedicated the win to his late friend Ricky.

Since signing with the world’s leading mixed martial arts promotion, the lightweight’s popularity has shot through the roof. He’s developed a huge UFC following, signed mega deals with brands like Barstool Sports and looks set to only grow his star further.

But things nearly went wrong when he took to the octagon on Saturday night. America’s Jordan Leavitt came to win and nearly succeeded. Despite getting the entire O2 Arena bouncing to his house music entrance, the contest couldn’t have started much worse.

The underdog ragdolled the home fighter en route to a comfortable first round. But ultimately, the Liverpudlian rode the storm and turned the tables. He secured a brutal rear-naked choke, which forced Leavitt to tap.

The O2 erupted as Pimblett jumped out of the cage to celebrate with his friend Molly McCann, who had secured a win herself earlier in the night. But when Michael Bisping stepped into the octagon for the post-fight interview, the victor dropped his bravado and delivered a powerful message to men around the world.

Preparing to set foot in the cage comes with a great deal of stress. To lose somebody who means a lot to you less than two days prior would undoubtedly distract you from the task at hand. For Pimblett to cope with the grief, produce the finish and then deliver an incredible speech says a great deal about his character.

The 155-pound fighter dedicated his showing to his buddy Ricky and baby Lee, who passed away from metastatic rhabdomyosarcoma alveolar, a rare disease that forms in the soft tissue, on June 26.

Pimblett said: “I want to dedicate this fight to little ‘baby Lee’, a little warrior and more of a fighter than any of us will ever be. But also, I woke up on Friday morning at 4 AM to a message that one of my friends back home had killed himself – this was five hours before my weigh-in – so Ricky lad that was for you.

“There’s a stigma in this world that men can’t talk. Listen, if you’re a man and you’ve got a weight on your shoulders, and you think the only way you can solve it is by killing yourself – please speak to someone. Speak to anyone.

“People would rather, I know I’d rather, have their mate cry on their shoulder than go to their funeral. So please, let’s get rid of this stigma and men start talking.”

Why was Dillon Danis thrown out of UFC 268?