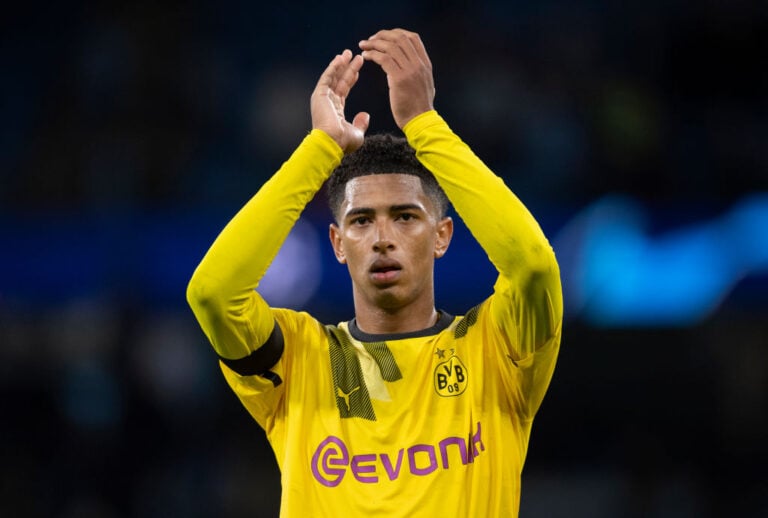 Pep Guardiola has expressed his admiration of Borussia Dortmund’s Jude Bellingham as the Manchester City boss prepares to face the Bundesliga side in the Champions League.

Guardiola praised the young England talent for the way in which he has developed whilst plying his trade abroad.

“He was 17 when he arrived but it was not just about his quality,” said the Man City boss, via BBC Sport.

“It was how he was leading, his kicking, going to the referee. This guy was something special in terms of his mentality. Now he is 19 and he is already one of the captains.

“The whole package is really good.”

Also receiving the Guardiola seal of approval was Borussia Dortmund.

He considers them the “perfect place” for youngsters to develop.

“Maybe if Jude Bellingham was in England he would go to City, United, Liverpool, Chelsea, Arsenal or Tottenham,” added Pep Guardiola [via The Guardian].

“But maybe he would not get the minutes. The best thing for a young player to be better is to play minutes.

“I think Borussia Dortmund is the perfect place for young talent to come.”

Despite Dortmund’s status as one of Europe’s biggest clubs, it is still often considered a steppingstone ahead of joining other sides.

As a result, rumours suggest that Bellingham may be looking for a new club next summer.

Which clubs are chasing Jude Bellingham?

A handful of clubs are currently front-runners for the 19-year-old star.

Firstly, Liverpool is a long-time admirer of Bellingham’s game. Reports claim that they could make a move in the January transfer window in order to jump ahead of others.

However, given the Reds slow start to the season, they could face difficulty in luring Bellingham to Anfield if they finish outside the top four.

Liverpool also face worrying competition for Bellingham in the form of Real Madrid.

Per Marca, Madrid is a big fan of the Englishman The team is also looking to re-build its veteran midfield with some youth, too.

But why not Manchester City? Pep Guardiola clearly rates Jude Bellingham, plus they could easily afford the £100+ million price tag.

The Express suggest that City could join the race for his signature.

And the City boss should get another chance to watch the midfielder when the Premier League champs face Dortmund tonight.

Jude Bellingham has been a thorn in City’s side when Dortmund have played them.

In their first encounter this season, the midfielder put his club ahead with a clinical header. Unfortunately, the English side overcame the 1-0 deficit to win 2-1.

Both Bellingham and Dortmund carry good form into their latest clash, though. The English youngster has scored in every Champions League match so far this season.

The Bundesliga side may therefore fancy their chances at home against City tonight. Especially as Pep Guardiola may rotate some of his stars. This comes after City have already qualified for the knockout stage.

With a win, however, Dortmund can also seal their place in the round of 16.

They will hope that returning hero Erling Haaland doesn’t scupper their chances of UCL progression tonight.