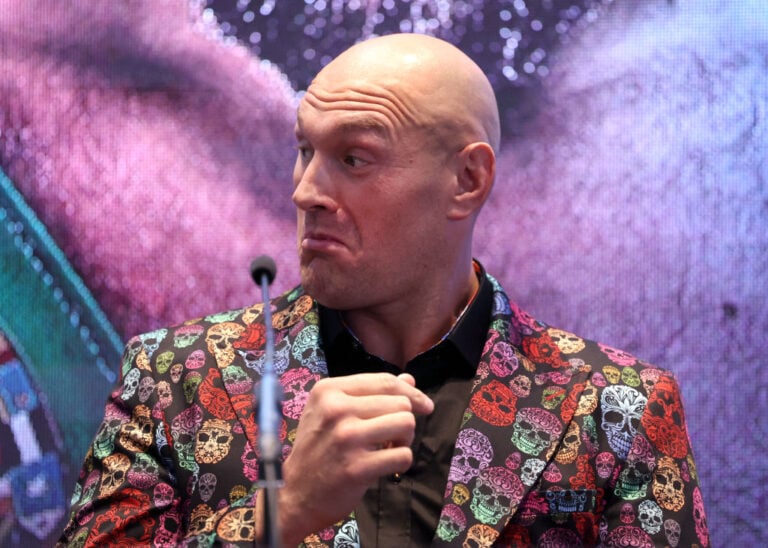 Reports have emerged claiming that Tyson Fury and Oleksandr Usyk are planning a massive heavyweight showdown in Saudi Arabia.

The news comes after Fury’s co-promoter, Bob Arum, confirmed that talks with Usyk’s camp would commence this week.

If they can work out an agreement, a unification of the heavyweight belts will be on the cards.

On Monday, ESPN Boxing insider Mike Coppinger revealed via Twitter that there is talk of the fight being held in the Middle East early next year.

“I think all along Fury wanted to fight Oleksandr Usyk for the undisputed championship,” said Coppinger on ‘Max on Boxing’, ESPN.

“It’s a massive fight. And I’m told there are still talks going on for Fury and Usyk to fight in Saudi Arabia, in March, for all four belts.”

Many boxing fans will rejoice at these revelations, as it has seemed like the pair may never actually face one another.

After beating Dillian Whyte in April 2022, Tyson Fury announced his retirement from boxing in mid-August.

However, the door never appeared fully closed on Fury’s career, especially when Usyk called him out for a unification battle.

“I’m sure that Tyson Fury is not retired yet,” said Oleksandr Usyk after beating Anthony Joshua [via Sky Sports].

Following Usyk’s statement, the Gypsy King decided to un-retire with the intention of fighting the Ukrainian in December 2022.

But, yet again, the pair of boxing stars did not reach an agreement. Instead, Fury is taking on Derek Chisora in a trilogy fight at Tottenham Hotspur Stadium.

This decision irked his rival’s camp, who branded Fury a “chatterbox”. They also said that Fury looks for “easy fights”, per Manchester Evening News.

Regardless of Usyk’s views, the all-British battle is going ahead on 3 December.

“I rate Derek Chisora as highly as I rate Usyk,” said the WBC champion, via ESPN. “And I will train as hard for Derek as I would for anyone in the world. I’d have to be an idiot not to.”

For instance, numerous people in the boxing community consider Fury-Chisora 3 as a “tune-up” for the heavyweight’s eventual battle with Usyk.

ESPN’s Coppinger thinks that a Fury-Joshua fight would have been a similar case – but harder to negotiate. Therefore, the Gypsy King’s camp landed on Chisora.

“Fury saw Joshua as a tune-up, I suppose,” said Coppinger on Twitter. “He doesn’t think Joshua poses much of a challenge. So, Chisora seemed to be the only guy available that has a big name in the UK.

“Like I said, he’s a credible opponent. But the problem is that Fury has beaten him twice – so who wants to see that again?

Time will tell to see if fans finally get their undisputed title fight next year.