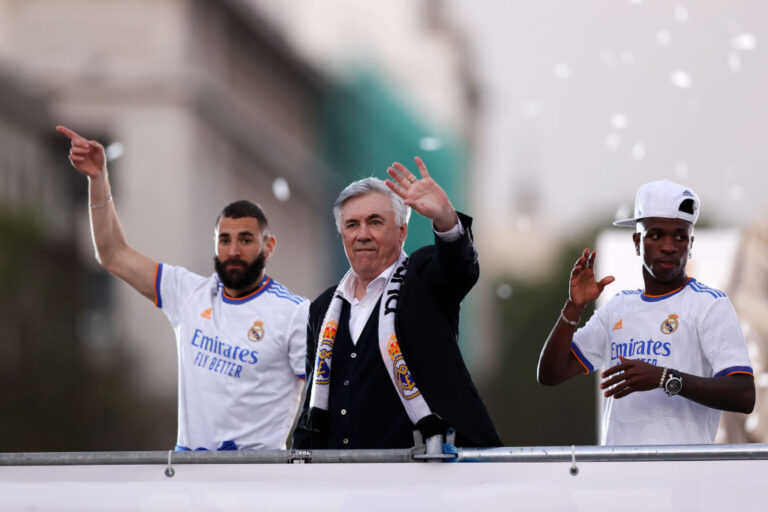 Real Madrid won an incredible 35th La Liga title with a 4-0 win over Espanyol on Saturday – and there are some incredible photos of the team celebrating their accomplishment.

Carlo Ancelotti‘s side secured the Spanish league title with a superb performance that encapsulated their season. After winning four of their first five games, Real rarely looked back.

Los Blancos have lost just three games all season in the league. However, one of those was a heavy 4-0 defeat to arch-rivals Barcelona at the Bernabeu.

Karim Benzema has been in Ballon d’Or worthy form. He has smashed in 26 goals and provided 11 assists this term. In addition, barring a miraculous run of form from those behind him in the scoring charts, the Frenchman will storm to yet another Golden Boot.

The 34-year-old, unsurprisingly, got his name on the scoresheet against Espanyol. However, it was team-mate Rodrygo who stole the show.

The Brazilian, who has found himself playing a more critical role for the team in recent months, netted twice.

For his opening goal, he showed great feet before calmly placing his shot into the bottom corner from around 12 yards. Then, shortly before half-time, he wrong-footed his opposing defender with a driving run before slotting the ball into the opposite corner.

Marco Asensio made it three in the second half. Benzema then scored his customary goal to put some more gloss on the scoreline.

Following the victory, Real were presented with the La Liga trophy. They took it around the streets of Madrid to celebrate with their adoring fanbase.

The club did, however, take some precautions. The trophy was initially taped to the platform on the parade bus, suggesting Real were wary of another Sergio Ramos incident. The former Los Blancos defender once dropped the Copa del Rey trophy off the bus in 2011, before watching it be run over.

Here are some of the top photos from the day (all images courtesy of LaLiga):