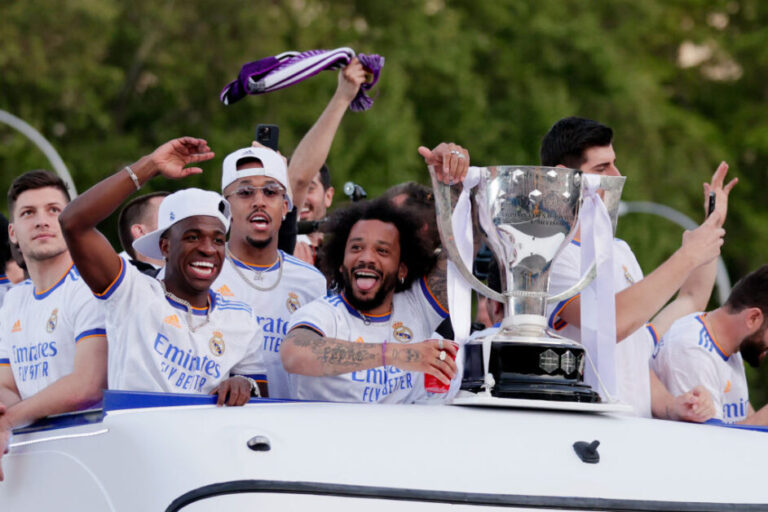 Real Madrid fans have been left howling after amusing precautions were put in place to keep their La Liga trophy safe.

On April 30, Los Blancos cemented their status as the best team in Spain by clinching a 35th league title. In an impressive showing, Real dismantled Espanyol 4-0 in one of the best performances of their season.

After starting brightly, Rodrygo found the opener in the 33rd minute before slotting home a second shortly after. The Spanish giants continued to dominate possession before Marco Asensio found the third at the start of the second half.

Karim Benzema bagged the fourth and last goal to further solidify his case for this year’s Ballon d’Or and put the icing on the cake.

Shortly after, the full-time whistle blew, and The Bernabéu crowd descended into raptures. And they weren’t the only ones with something to celebrate. Carlo Ancelotti made history with the win by becoming the first manager to win the league in all five of Europe’s major leagues.

The Italian has also won the Serie A, Ligue 1, Premier League and Bundesliga titles.

The result has left the fans, players, and the manager in a joyous mood. And consequently, they’ve heaped into the streets to celebrate.

In accordance with tradition, the squad went on a league-winning bus tour through the city. This allows fans to see their beloved Real Madrid heroes raise the trophy before their eyes. But some supporters have found themselves distracted by an amusing photo which has come to light.

The image shows an absurd amount of tape securing the piece of silverware to the vehicle.

Fans immediately drew comparisons to Sergio Ramos‘ trophy-related disaster back in 2011 – and who can blame them?

After winning the Copa Del Rey, the team toured around Madrid, showing off their prized possession. Then suddenly, the defender got carried away and sprung to the front of the bus. But amid the flares and the excitement, he dropped the trophy several feet and watched on in horror as the bus ran it over.

Luckily, however, it seems all the precautions were put in place to prevent history from repeating itself – and the trophy looks to be safe this time around.