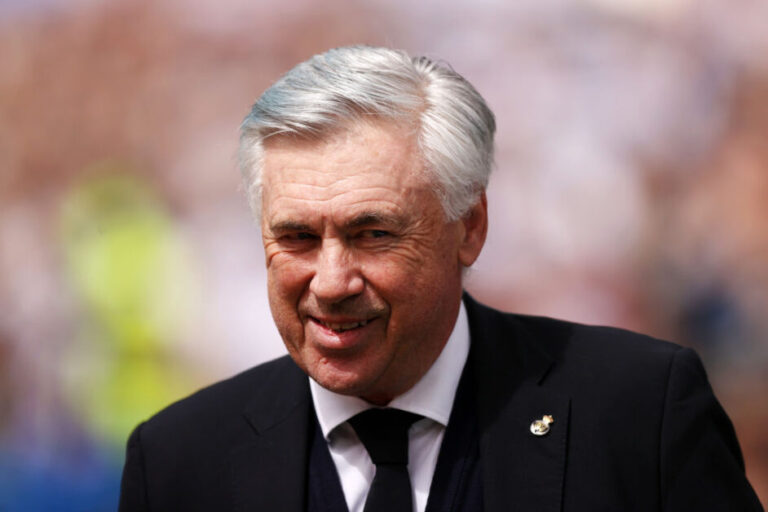 After Real Madrid won the 2021/22 La Liga title, Carlo Ancelotti was asked for an update on the potential transfer of Kylian Mbappe to Real Madrid.

The Italian had just become the first manager to win the top domestic title in Europe’s five major leagues.

Ancelotti won his only Serie A title with AC Milan in 2004, before winning the Premier League with Chelsea in 2009.

Subsequently, he helped Paris Saint-Germain to Ligue 1 success in 2013, before doing the same with Bayern Munich in 2017.

Back in March, it was reported that his position as manager at Real would have come under pressure had the club lost their Champions League last 16 tie to PSG. However, Los Blancos turned around a 1-0 deficit in the second leg. They are now in the semi-finals, although they must overturn a 4-3 deficit against Manchester City to progress to the final.

Ancelotti’s job is now seemingly secure. Following the end of this campaign, he can look forward to a second summer transfer window at Real. It promises to be a window filled with drama.

Real Madrid’s pursuit of Kylian Mbappe dates back to 2017, when he played for Monaco. At the time, the Frenchman opted to stay in his native France and join PSG, turning down Real in the process.

However, Mbappe is a boyhood Real fan – as was seen when PSG officials once visited his house and witnessed the full extent of his support for the club.

With his contract expiring at PSG this summer, the rumour mill has been on red alert for much of the past year. In August, Real submitted a £171.9 million bid on deadline day. However, the French giants rejected it.

Since then, PSG have been desperately trying to convince their star man to stay at Parc des Princes. Their renewal efforts have even involved French president Emmanuel Macron.

Earlier this week, PSG boss Mauricio Pochettino claimed that he felt Mbappe was “100%” sure to stay at the club next season.

But it appears, according to his Real Madrid counterpart’s recent comments, that figure may not be completely accurate.

When asked about the prospect of a transfer after Real won La Liga, Carlo Ancelotti refused to deny outright that a deal could be done.

Ancelotti then rebuffed a claim that those words meant Mbappe would be joining Real Madrid. However, Perez did little to quell the rumours either.

He said: “I hadn’t thought about it. But now you mention it, it might be true and so on. When we plan next year’s squad, let’s see.”

Wherever he plays his club football next season, Mbappe is almost guaranteed to perform as one of the best players in world football. That is why two European giants are trading blows to secure his future in their favour.