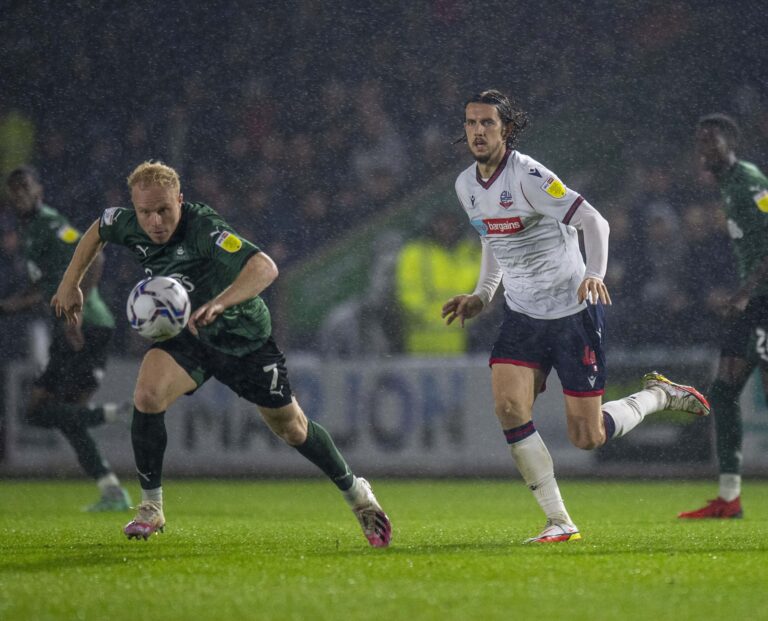 Plymouth Argyle secured a 3-0 victory over Bolton Wanderers last night to go top of the League One table – and it’s fair to say both sides had to deal with some adverse playing conditions late on.

The rain, in fact, fell heavily for much of the night. Ryan Lowe’s side went 2-0 up inside 15 minutes through goals from ex-Everton pair Brendan Galloway and Conor Grant.

Argyle would go on to add a third goal late on through Ryan Broom – in slightly comical circumstances.

The pitch had got so wet so the ball was simply sticking to the ground, which led to some chaotic scenes in the final moments.

Bolton defender Harry Brockbank threw the ball to team-mate Alex Baptiste, who controlled it and tried to send a pass forwards, but could only watch on as the return pass barely moved. Danny Mayor stole in and took a long touch forwards, before lifting the ball over the goalkeeper.

Just as he was about to put the finishing touches on the move, the ball again stopped completely. Ryan Hardie was then unable to get his shot away after good defending, but Broom was there to finally get control of the ball and fire it emphatically into the top of the net.

Fittingly in the circumstances, Broom celebrated by diving onto the ground before performing a swimming motion in front of the Argyle faithful. His team-mates all joined in.

Plymouth manager Lowe praised the Home Park ground staff for getting the game on – and the fact that the pitch played well for much of the encounter.

He told the club’s official website: “The ground staff were fantastic, we had some rain yesterday and then a lot again today, but this is what happens when you have good ground staff and a good pitch.”

Goalscorer Galloway, meanwhile, described what it was like to play in torrential conditions.

“I thought despite the weather, we showed great commitment and stuck with our plans and pushed each other on and got a great result,” he explained.

“It was quite difficult to judge the ball at times, it was windy, you weren’t quite sure whether the ball was going to bounce or whether it was just going to drop and stick. We have a great set of players here though and have a squad that can adapt and change our style depending on the conditions.”

Plymouth have accumulated 29 points from their opening 14 League One games and sit one point ahead of second-placed Sunderland, who have two games in hand.