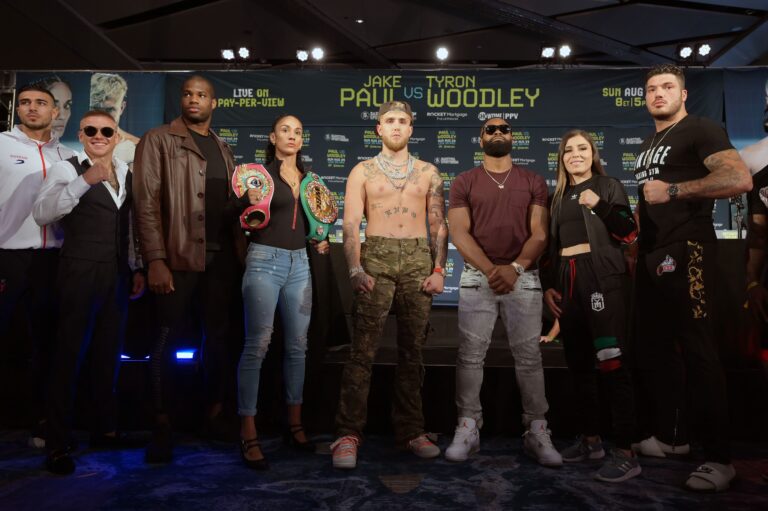 Boxing promoter Frank Warren has revealed that Jake Paul vs Tommy Fury “could” happen soon, and that he would try to get the fight held in the UK.

Both fighters competed on the same card on Sunday night, with Paul facing UFC star Tyron Woodley and Fury coming up against Anthony Taylor.

It was Fury’s first ever professional fight in the United States – and his first victory as well. The brother of Tyson Fury defeated Taylor via unanimous decision after a four-round bout.

The victory means that Fury is unbeaten after seven fights. It comes three months after he defeated Jordan Grant on points, in what was also a four-round fight.

Paul, meanwhile, recorded perhaps the biggest victory of his short professional career so far in defeating Woodley via split decision.

After the card had been completed, rumours began to spiral about whether Paul and Fury would face off in the future.

Boxing fans may remember that both men had several spats on Twitter after Fury’s victory over Scott Williams back in April.

Tyson Fury initially called out Paul with the words “where you at?”

The YouTuber then responded on Instagram: “I didn’t know Tyson Fury had a bro. I like Tyson Fury, I don’t want beef with Tyson Fury but damn, if Tyson Fury took a sh*t it would be this little brother, he’s literally like this little kid.”

Unsurprisingly, Tommy Fury then fired back, calling his rival a “Ken Barbie doll looking motherf*****” in a Twitter video.

Now it looks like both men may well face off in the ring in the near future.

Speaking to Sky Sports, promoter Warren explained: “Yes, it could [happen next] and we’d try to get it in the UK.”

Fury said after his victory on Sunday, addressing Paul: “If you want the fight, I’m ready to go. No running, no playing.

“I’ve done my part, he did his part. Why not make the fight next? It’s on the tip of everyone’s tongues.”