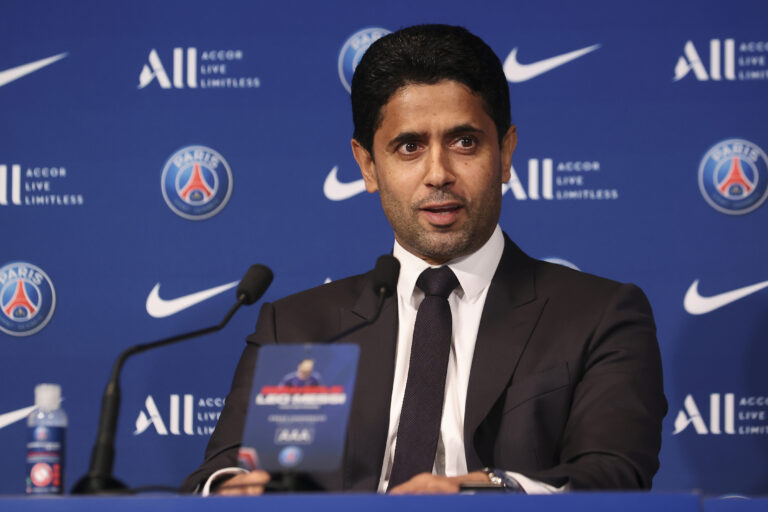 Paris Saint-Germain president Nasser al-Khelaifi has labelled the Super League the “not-so-Super-League”, and brandished it a “coup”.

Al-Khelaifi was speaking in his new role as head of the European Club Association, having been appointed in April – days after the Super League announcement.

PSG were not one of the 12 clubs named as ‘Founding Members’ for the breakaway tournament.

At the time, Al-Khelaifi announced that PSG would continue to play in UEFA competitions.

Days after the original announcement which shocked world football, the Super League was effectively ended as all six English clubs named in the original proposal pulled out, as well as Inter Milan, AC Milan and Atletico Madrid.

Three teams, however, have reaffirmed their commitment to the project – Barcelona, Real Madrid and Juventus.

Al-Khelaifi confirmed yesterday that the nine clubs who withdrew have been readmitted to the ECA, before directing his ire towards the “rebel clubs”.

In his opening address to the ECA’s annual meeting, he said: “While the three rebel clubs waste energies, twist narratives and continue to shout at the sky, the rest of us are moving forward and focusing every energy on building a better future for European football – together as one.

“I will not spend much time talking about the 18th of April, and the not-so-Super League, because I do not like to focus on fabulists and failures.

“Together, we defended the interests of European football for everyone – for the players, the clubs, the leagues, the national associations and, most of all, the fans.

“For the nine clubs who asked to come back into our family, the ECA board has re-integrated them into our structures with renewed commitments to strengthen our association. I welcome them back to the ECA family.

“We relied on the resolve and strength of president [Aleksander] Ceferin, who stood up to the midnight coup – and people with short memories should remember that this is exactly what it was.”