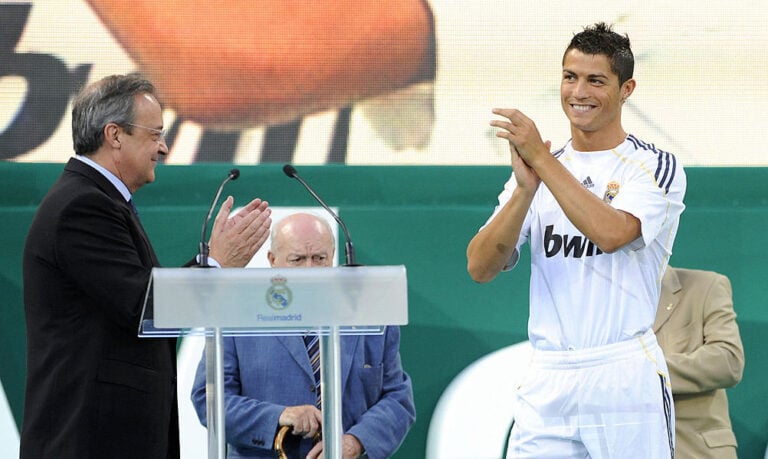 Real Madrid became renowned in the 2000s and early 2010s for pursuing a ‘Galactico’ policy when it came to signings.

Florentino Perez adopted the policy after beginning his first spell as Real president in 2000.

Perez aimed to make Real the most glamourous club in world football. To do this, he would pursue one world superstar signing per summer, combining them with promising youth talent.

His first major deal was perhaps the most controversial in football history. He signed reigning Ballon d’Or winner Luis Figo from arch-rivals Barcelona in 2000.

The Spaniard signed an agreement with Figo when he was a Real presidential candidate. Essentially, if Perez won the election, Figo would become a Barcelona player – unless he paid a penalty fee of an eye-watering £18.75 million.

But the signing of the Portuguese icon paved the way for the Galacticos to continue arriving. During Perez’s first stint as president, Zinedine Zidane, David Beckham and Ronaldo were amongst the megastars to sign for the club.

Real initially achieved great success. They won the Champions League in 2002, followed by La Liga in 2003. But manager Vicente del Bosque was controversially sacked, and Real did not win a single trophy in 2004/05, or 2005/06. In February 2006, Perez resigned.

He returned in 2009, replacing Ramon Calderon. The big-money signings returned. Cristiano Ronaldo had already agreed to join the club for a world-record fee under Calderon, but the likes of Gareth Bale, Kaka and James Rodriguez would all move to the club for huge fees.

But can you remember how much some of the Galactico signings cost Real Madrid? Take our quiz below to find out: