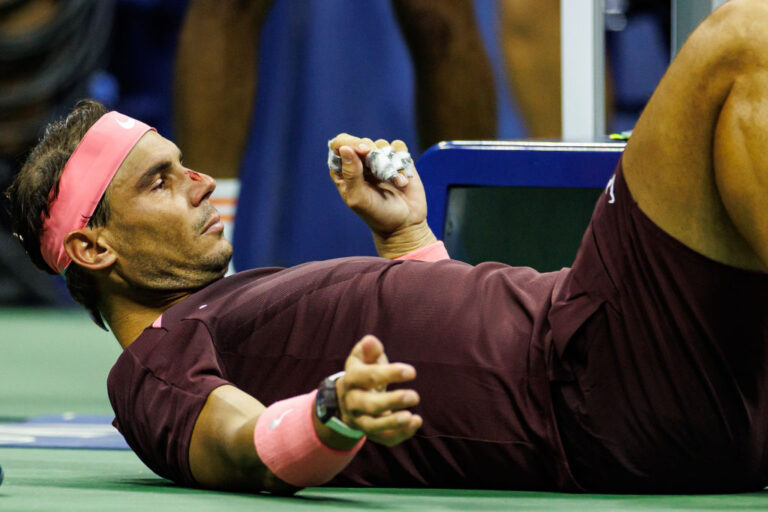 Rafael Nadal fought his way through to the third round of the US Open last night, giving himself a bloody nose in the process.

After a shockingly poor start, where he made 27 unforced errors in the first two sets, Nadal finally found a rhythm that allowed him to close out the win. This victory also proved some sweet revenge for the Spaniard. In 2015, Fognini shocked the world by defeating Nadal in a five-set third-round thriller at the same competition.

Sadly, though, the Italian was unable to repeat that feat. He did cause the 22-time Grand Slam winner some problems, however, breaking Nadal’s serve five times in the first two sets.

Aside from the shaky start, Rafael Nadal had a freak injury to contend with during the second-round matchup, too.

Whilst up three games to love in the fourth set, a bizarre incident forced Nadal to take an injury timeout.

A powerful backhand from Fognini wrong-footed his opponent, causing Nadal to leap in order to change direction. He then reached out with his racquet to make the shot – and returned the ball successfully.

However, the strong reach and direction change caused Nadal’s racquet to hit the hard surface of the Arthur Ashe Stadium. The racquet then ricocheted off the ground before smashing into Nadal’s nose.

Nadal immediately dropped his racquet in response to the whack, signalling that he required medical attention. The confused crowd watched on with concern as a bloodied Rafael Nadal preceded to lay down on the ground in pain.

Thankfully, after receiving treatment, the Spaniard continued on to advance to round three.

Who does Nadal face in the third round?

Following his win over Fognini, Rafael Nadal faces veteran French star Richard Gasquet. The former World No.7 is the 32-seed at the US Open this year but has proved a stern test in the past.

Unfortunately, history does not bode well for Richard Gasquet. He has never beaten Rafael Nadal in an ATP Tour event – which includes Grand Slams – currently having an 0-17 record against the Spaniard. Their last match was at the 2021 Roland Garros, which Nadal won in straight sets.

Nadal will therefore hope for a similar outcome on the hard courts of the US Open on Saturday.