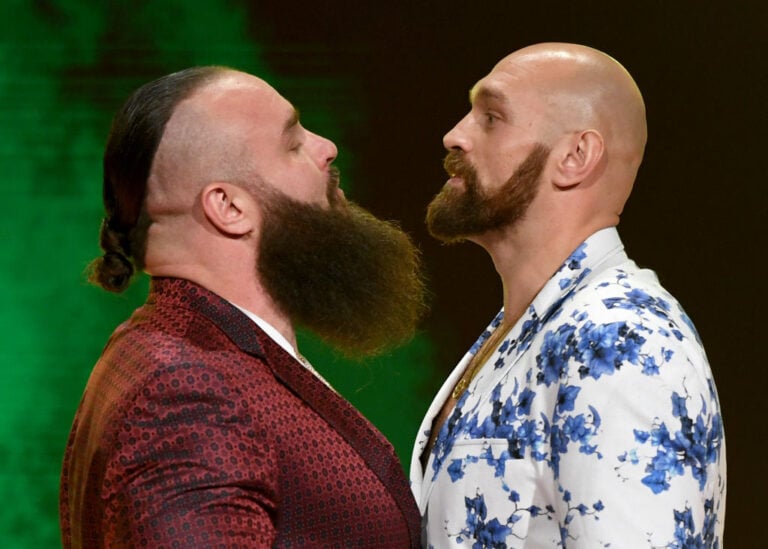 With WWE Clash at the Castle just a day away, fans are wondering whether Tyson Fury will set foot in the ring for a surprise appearance.

While boxing enthusiasts around the globe are fixated on a collision between ‘The Gypsy King’ and Oleksandr Usyk, the wrestling community is far more focused on this weekend’s colossal premium live event.

The company will give British fans a long-awaited premium event for the first time in nearly twenty years. In the main event, Drew McIntyre will challenge Roman Reigns in front of a packed out Principality Stadium. And the proud Scotsman will have the majority of the 74,500 crowd behind him as he attempts to finally dethrone ‘The Tribal Chief’.

Being a huge fan of the sport, it is no shock that Fury will have ringside seats to enjoy the action. But many are speculating that the WBC heavyweight champion might get involved in the festivities himself.

Has Tyson Fury ever competed in WWE?

This would not be the first time Fury would be trading leather in the WWE ring. Back in 2019, he shared an epic rivalry with Braun Strowman. After being knocked to the canvas by ‘The Monster Among Men’, the boxer wanted an apology. But the 385-pound behemoth didn’t seem keen to give him one.

Consequently, the two monsters engaged in a huge brawl that needed the entire locker room to split up. Ultimately, the juggernauts settled their rivalry at Crown Jewel, with Fury coming out on top. But after one victory in front of the WWE Universe, he’s keen to get another.

Earlier this year, his wife, Paris, told BBC Newcastle that he’s keen to make his return.

She said. “He is in touch with [then-chairman and CEO] Vince McMahon all the time. He loves it.

“My sons are all big fans of it. For Tyson to do it is kind of like a Disneyland trip. The kids love to go, and they meet all the wrestlers.

“To be that cool dad that can give them kids that dream, he does it. I think that’s one of the reasons we’ve come to do this, and obviously, being a young man, he told me he was a fan of all these wrestlers.

“So he’s probably going to go into that again. I’m sure he will bounce into that WWE ring one of the days.”