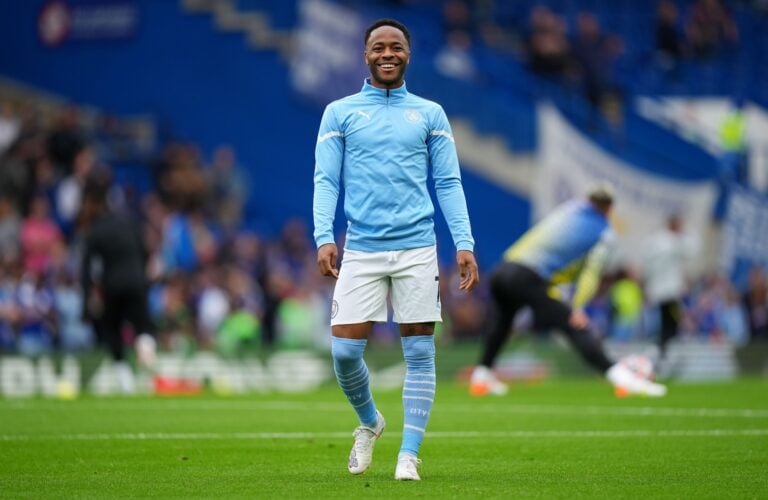 Raheem Sterling has said he would be open to a move if he doesn’t get more game time at Manchester City – and adds that one day he would love to play abroad.

Sterling went into this season off the back of an outstanding Euro 2020 with England. He started every game of the tournament for Gareth Southgate‘s side en route to the final.

The 26-year-old scored three goals and provided one assist.

However, he has started just two Premier League games for the Citizens this campaign.

The likes of Gabriel Jesus, Phil Foden and Riyad Mahrez have generally been preferred in Sterling’s favoured positions on the wing by City boss Pep Guardiola.

Sterling has now revealed that he would be “open” to an opportunity to move to another club.

Speaking in an interview at the Financial Times‘ Business of Sport US Summit, he said: “If there was the opportunity to go somewhere else, I would be open to it.”

“At this moment in time, football is the most important thing to me. I have always had something that maybe one day I would love to play abroad and see how I meet that challenge.”

According to Spanish news outlet Sport, Sterling was a transfer target for Barcelona in the summer transfer window. They are also linked with an interest in signing him in January.

Speaking in his pre-match press conference ahead of this weekend’s Premier League clash against Burnley, Guardiola said that he cannot assure his players of how many minutes they will play.

He said (quotes via Manchester Evening News): “Raheem is our player, hopefully he will be an incredibly important player for us. I don’t know if he wants to play more. Riyad doesn’t play and he doesn’t complain, Joao [Cancelo] too.”

“What I want from Raheem and everyone is they have to be satisfied to be here and delighted to be here. If that’s not the case he has to take the best decision for his family. I was a player, I understand completely, I wanted to play.”

City take on Burnley at the Etihad Stadium on Saturday. Depending on results elsewhere, a win could take them to the top of the Premier League table.

They currently sit third in the table, behind Liverpool and leaders Chelsea.