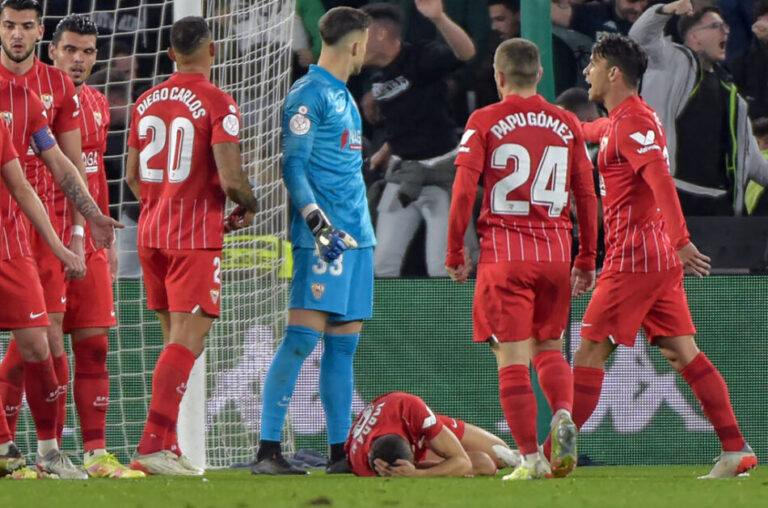 The Copa del Rey derby between Sevilla and Betis was cancelled after Sevilla player Joan Jordán was hit in the head with a plastic pole thrown from the crowd.

Arguably Spain’s most heated rivalry, the Seville derby saw both teams clash in a last-32 Cup game on Saturday night.

Things between both fanbases have only got hotter this season, as Betis and Sevilla fight for a top-four spot in La Liga.

The game started out mirroring the off-the-pitch atmosphere, with Betis star Nabil Fekir seeing a yellow card after a first-minute challenge.

In the 35th minute, Papu Gomez gave Sevilla the lead from the edge of the area. It didn’t take long for the local team to answer. Five minutes later, Nabil Fekir equalised the game with an astonishing Olimpico goal.

Spain’s most intense rivalry gets even hotter

While Betis celebrated Fekir’s screamer, a fan threw a plastic pole at Sevilla midfielder Joan Jordán, hitting him in the head. Jordán went down in shock, but he was on his feet shortly after.

Shortly after the incident, Referee De Burgos Bengoetxea would put the game on hold for 20 minutes. Once the wait was over, the Spanish Federation announced the derby’s suspension.

After much deliberation, the Spanish Football Federation has decided to resume the game today, Sunday the 16th of January, at 15.00 UK time. However, the clash will take place behind closed doors.

The referee’s post-game report shows that a fan in the Betis stands struck Jordán with a hollow 20-inch PVC bar. The player was soon taken to hospital, where he was duly cleared.

The midfielder is currently recovering at home as he follows the 24-hour observation period outlined in the protocol for head injuries.

That means that Jordán won’t be able to play when the game resumes.

However, not everyone buys that Jordan’s injury is serious. After officials called the game off, Betis players rushed to social media to mock the incident, implying that Jordán was not hurt at all.

Sevilla – Betis derby fiasco: What the protagonists have to say

“This was an embarrassing and unjustifiable event that does not speak for our fanbase. I hope Joan Jordán is ok, although we have all heard (including the fourth official) how his manager encouraged him to pretend to be dazed and lie on the ground.”

Camarasa’s strong accusation implies that Sevilla tried to get Betis disqualified. Lopetegui’s team arrived at the derby with their squad ravaged by injuries. Their lack of personnel makes Betis fans believe there’s a secret agenda behind the fiasco.

Other Betis stars further echoed these accusations. Former Barcelona winger Cristian Tello posted a short video of Jordán winding Betis players up right before the game was called off.

Tello doubled down on Camarasa’s accusations: “Everyone on the pitch witnessed what Sevilla’s end goal was to stop the game.”

The midfielder “will be kept under home observation until a minimum period of 24 hours has passed without any alarming symptoms.”

The club has called for “the utmost respect for Joan Jordán, a true professional and an exemplary person.”

Betis and Sevilla will meet again in a La Liga clash in late February.