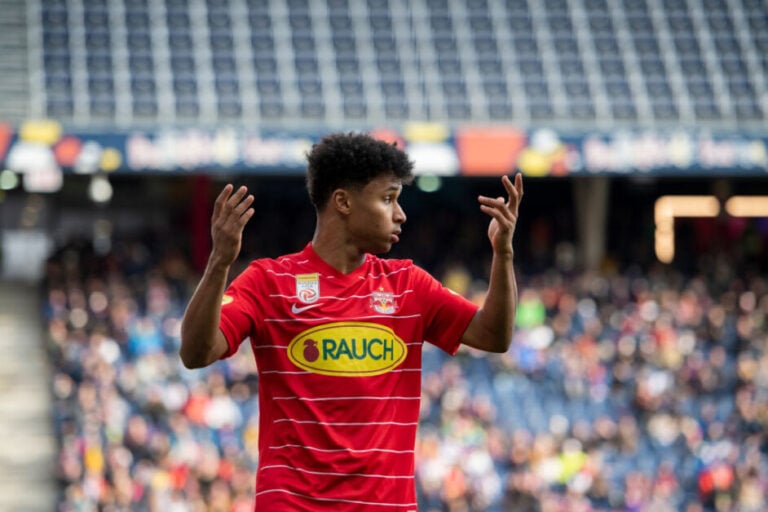 Red Bull Salzburg have named the transfer fee clubs will have to pay to sign starlet Karim Adeyemi.

Adeyemi is one of the brightest talents in European football, with several clubs trying to pry him away.

Adeyemi’s rise to the top

Having left the Bundesliga giants amidst an ugly contract dispute, the forward signed for SpVgg Unterhaching. From there, he joined Red Bull Salzburg in 2018.

Initially signing a three-year contract with the Austrian side, Adeyemi struggled to impress in the first-team set-up.

However, it didn’t take long for Adeyemi to find his groove.

Adeyemi featured 29 times and scored seven goals for Salzburg as they romped to the 2020/21 Austrian Bundesliga title.

Continuing his form into the current campaign, Adeyemi has already netted 18 times in 31 appearances for Salzburg.

A chunk of those goals have come in the Champions League, where the 20-year-old netted three times for Salzburg during the group stage.

Adeyemi is capable of beating a defender with pace or skill. It’s no shock that so many clubs want to sign him.

Linked with both Barcelona and Real Madrid, Adeyemi has also garnered interest from Borussia Dortmund and Liverpool.

German news outlet Bild report that Salzburg will demand a hefty €42.5 million for the 20-year-old.

“If the transfer should take place, all of Dortmund can look forward to this talented boy,” Gundogan said during Dortmund’s recent clash with Borussia Mönchengladbach.

Adeyemi will not be short of potential destinations if Dortmund drops out.

Barcelona’s reported sponsorship deal with Spotify will allow them to delve deep into the summer market. The La Liga giants are on the lookout for a new forward.

Read: Who is Karim Adeyemi? The star prospect linked with Liverpool, Barcelona and Real Madrid.

Elsewhere, Real Madrid remains an option for Adeyemi, despite Los Blancos’ pursuit of Kylian Mbappe. Liverpool are also lining up a bid for Adeyemi.

Salzburg will likely bank a tidy profit wherever Adeyemi ends up going.