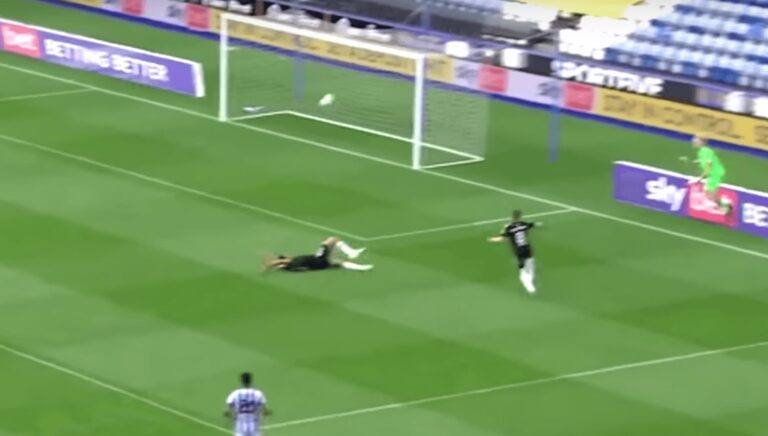 A Reddit user has compiled together a list of the worst goals scored in the 2021/22 season. From goalkeeping errors to unfortunate ricochets, the list makes for brilliant viewing.

This year we have seen some sublime goals. Lionel Messi’s finish against Man City in the Champions League, and Mohamed Salah’s solo run against the Cityzens both live long in the memory.

But there have also been plenty of goals that are simply awful to watch.

Thanks to Reddit user r/Meladroite, we can now watch some truly horrific goals from the 2021/22 season. The eight-minute-long video is certainly worth a viewing.

The compilation begins with a goal that fades the line between awful play and brilliance.

A Rwandan player rises high from a corner and heads toward the floor. The header cannons off Rwatubyaye’s leg and loops beyond the goalkeeper into the back of the net.

This goal is remarkably similar to a goal that occurred in English football not too long ago; Mohamed Diame’s lopping effort against Brighton in 2017.

There is, in fact, a goal from England on this list. Mitrovic’s effort for Fulham becomes more entertaining the more you watch it!

The goalkeeper chests the ball to try and keep it in play, before scuffing a poor clearance towards the approaching Mitrovic. Despite losing his footing, the Serbian somehow manages to angle his left knee towards the ball and direct his effort into the back of the net.

A comedic goal for a striker who lit up the Championship in 2021/22.

A calamity at the back for French second division side Amiens makes its way onto the list.

Dossevi chests the ball down for his goalkeeper, but no one could have expected what would happen next. The Amiens goalkeeper tries to control the ball with his feet and sees it roll over his foot and into the back of the net.

What’s more surprising is that the goalkeeper would have been perfectly fine to claim the ball with his hands from the chest down. This goal epitomises the phrase ‘defensive mix-up.’

The final standout goal in the compilation is from Lazio goalkeeper Thomas Strakosha.

After a looping clearance from his defender, Strakosha looks to be about to claim the ball calmly. However, the Albanian fumbles his catch into the post and sees the ball bounce back of himself again and into the net.

Keep your eyes on the ball, Thomas!