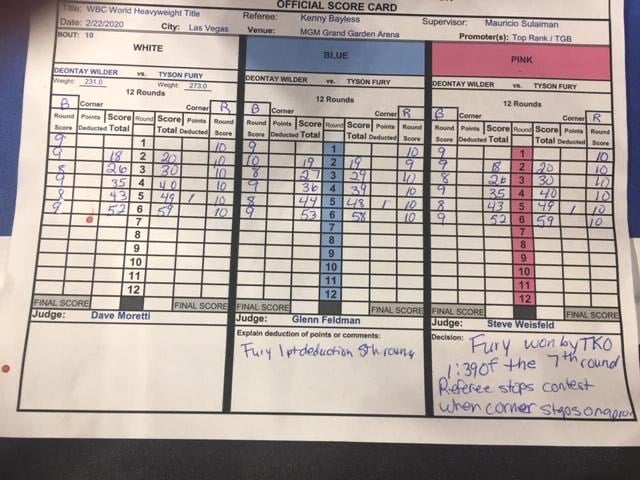 Tyson Fury was crowned WBC Heavyweight Champion on Saturday night, knocking out Deontay Wilder to complete his comeback to the sport – but how did the 3 judges see the fight?

The 31-year old picked up the victory in the 7th round after Wilder’s corner threw the towel in, much to the delight of the 15,816 in attendance at the MGM Grand Garden Arena.

Fury, who predicted he’d win via 2nd round knockout, had the better of the American from the opening bell – slipping past his shots with easy before firing back towards the end of the 1st round as all 3 judges scored 10-9 to Fury.

The second round was much of the same as Wilder attempted to counter Fury’s attack but to no avail, but was somehow awarded the round by Glenn Feldman.

The Gypsy King’s dominance paid off in the 3rd Round, dropping Wilder to the canvas – only the second time in his career – with a looping right hand. All 3 judges were in agreement that Fury was on top and scored the round 10-8 to him.

Wilder never regained his footing after that knockdown with Fury’s onslaught of attacks proving to be too much for Wilder as he was knocked down again in the 5th Round.

Fury was deducted a point for punching on the break but that didn’t prevent him from being scored the round 10-8.

The former WBC Heavyweight champion looked all over the place by the start of the 6th round and the fight was all over when Wilder’s corner threw in the towel in the 7th round.

Fury’s complete performance was reflected in the scorecard with Steve Weisfeld and Dave Moretti scoring it 59-52 in favour of the 31-year old, with Feldman scoring it 58-53.

The win seals the comeback for Fury after the Briton battled back from depression to become WBC Heavyweight Champion of the world.

He’s now the first ever boxer in history to have won every major world title in the heavyweight division at some point in his career.

With the other 4 belts in the division taken by Anthony Joshua, it’s surely now only a matter of time before we see a unification bout between the 2 British giants.