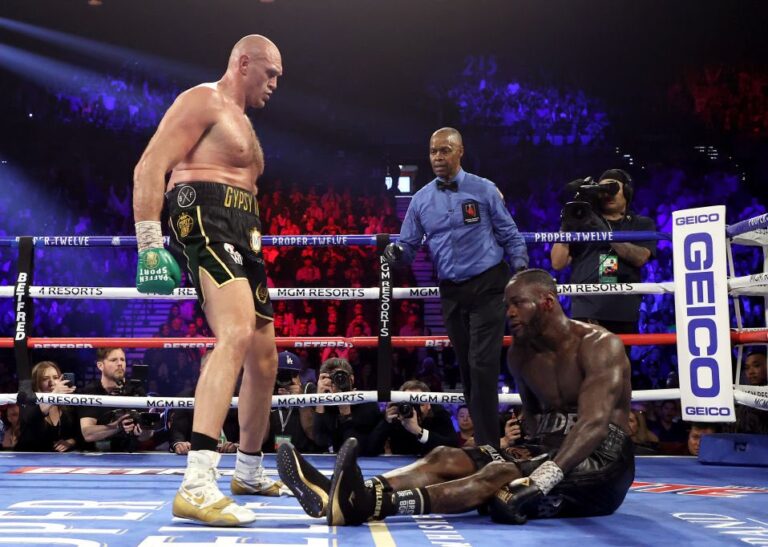 It’s been a long, tough road for Tyson Fury – one that looked to have run far past the point of return on more than one occasion.

During his three years away from the sport, it was tough to see the Gypsy King returning to the ring at all – never mind sitting atop the whole heavyweight division after defeating the most dangerous man in the sport.

Fury’s comeback was completed on Saturday night as he ended Deontay Wilder’s unbeaten streak to claim the WBC Heavyweight title.

Fury was dominant throughout the entire fight, putting in a perfect performance in front of a loud MGM Grand Garden Arena.

The 31-year old knocked Wilder down in Round 3 and Round 5 before Wilder’s corner threw the towel in in Round 7, much to the delight of the pro-Fury crowd.

Anthony Joshua will of course feel he’s the best in the division, though Fury now remains the only undefeated fighter in the big three, an astounding achievement given where he was two years ago.

With all that being said, it’s hard to argue with Tyson being the king of that division now and the bragging rights are well and truly his to lose.

The Wilder fight offered the perfect ending to Fury’s resurrection story. He now moves on to a new chapter, one in which the crown is his to defend.

While that AJ fight is the one we’re desperate to see, Joshua is now the fighter with more to prove. The Watford fighter is yet to face-off against either of the division’s best and until he does, it’s tough to put him on the same level as his fellow Brit.

There’s also the small matter of a third Wilder showdown. We’d be foolish to think the Bronze Bomber won’t be doing everything he can to have another shot at Fury. We know he holds the ability to drop the Manchester fighter and he’ll want revenge as quickly as possible.

Whether he won or lost this fight, the Gypsy King has transcended the sport of boxing, instead becoming a symbol for something much more important. His story serves as an inspiration for millions across the globe and having the greatest heavyweight on the planet speaking openly about his struggles is a truly great thing.