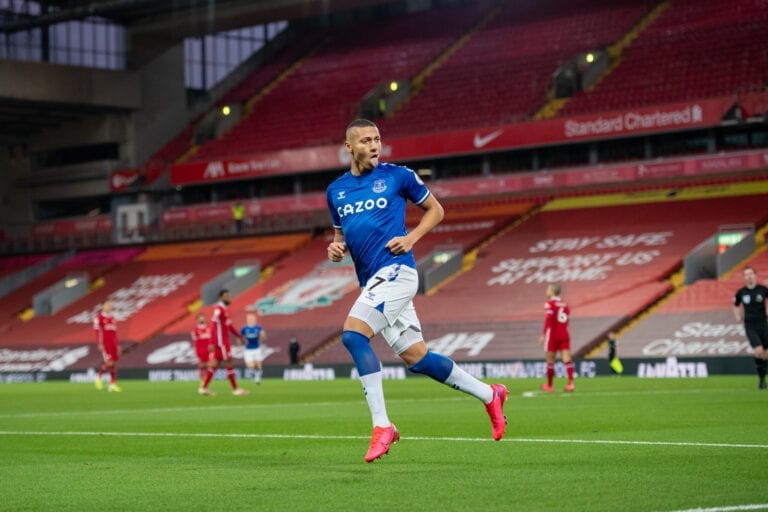 Everton forward Richarlison has said that his social media interactions with Liverpool fans have helped him to learn English.

The 23-year-old moved to England in 2017 upon signing for Watford. He then joined his current club a year later.

He poked fun at Liverpool fans after Everton won 2-0 in the Merseyside Derby last month by replying to several tweets with an image of his goal scored during the game.

Richarlison said in an interview with Metro (via Liverpool Echo) that he knows Reds supporters aren’t huge fans of him – as you would expect, given the rivalry between the two sides – but says he likes to enjoy a laugh with them on social media.

He also spoke about how it helps his language skills as well.

“I always like to bring happiness or joy to everyone, whether that’s the people who are criticising me or the Everton fans who really like me,” he explained.

“It also helps me with learning English as well.

“By interacting with people and the fans as much as possible, particularly here in England, it helps me develop my English.

“I always like to have a laugh with people.

“I know the Liverpool fans aren’t fond of me but I like to have a laugh with them so I’m always replying in a joking way.

“That’s a part of football. I think you shouldn’t take it to heart, and you should also look to have some fun and a laugh with other people.”

The Brazilian starlet has been in fine form for the Toffees in recent months, scoring six goals in his last 11 appearances.

Carlo Ancelotti‘s side currently sit in seventh position in the Premier League on 48 points, although have failed to win any of their last four league games. They do have a game in hand on those above, with eight games in total left for them to play.

Richarlison says the team will fight until the very end to attempt to secure a European place.

He said: “We are developing and we’re now looking for a place in the Europa League or Champions League.

“We’ll fight until the very end of the season to achieve this because it’s what the club and the fans really deserve.”