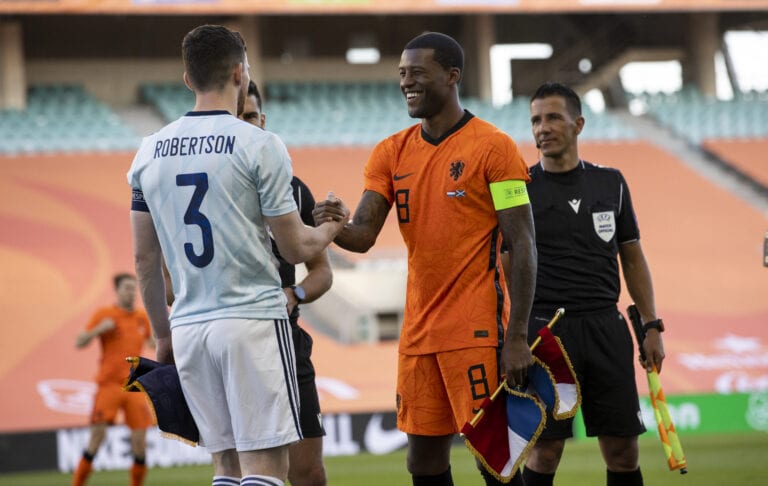 Liverpool pair Andy Robertson and Georginio Wijnaldum shared a wholesome moment prior to Scotland‘s friendly with the Netherlands yesterday.

Wijnaldum has likely played his last game for the Reds, with his contract expiring at the end of this month.

The Dutchman is reportedly on the verge of a move to Barcelona on a free transfer.

Several Liverpool players appeared to be bidding their farewells to the midfielder on social media last week, with Jordan Henderson and Trent Alexander-Arnold amongst those directing tweets to Wijnaldum.

Wijnaldum’s appearance for the Netherlands on Tuesday night was his first since what looks like his last game for the Reds.

As part of his duties as captain, he met up with Scotland skipper Robertson in the centre circle prior to kick-off, and both men had an emotional exchange.

Wijnaldum said: “I want to hug you, but…”, before Robertson responded with: “I know, but we can’t…”

The friendly turned out to be hard-fought, with a depleted Scotland side twice taking the lead through Jack Hendry and Kevin Nisbet.

Memphis Depay scored twice for the Netherlands, with the game ending in a 2-2 draw.

Wijnaldum set up Depay’s opening goal, before being substituted alongside Frenkie De Jong on 30 minutes.

The Netherlands are in Group C at Euro 2020, and kick off their campaign against Ukraine on June 13.

Scotland are in action a day later, taking on Czech Republic in their opening game of Group D. Five days later, they face England at Wembley.