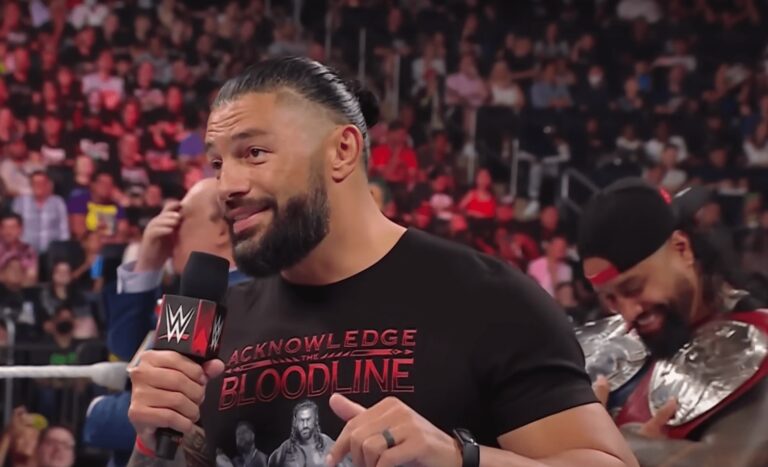 Vince McMahon may have retired from WWE, but that hasn’t stopped him being mentioned on television programming, with Roman Reigns the latest to refer to the former chairman and CEO.

The Undisputed WWE Universal Champion made a rare appearance on Raw on Monday night. The show was held in Madison Square Garden. With SummerSlam taking place this weekend, Reigns was present to further hype his Last Man Standing match against Brock Lesnar.

He opened the show alongside Jimmy and Jey Uso, and Paul Heyman. The Bloodline delivered a promo, with Heyman telling fans that his client would destroy Lesnar at SummerSlam.

During the promo, however, the Bloodline were interrupted by none other than the current Mr. Money in the Bank. Theory again spoke of how he would cash in his briefcase and walk out of SummerSlam as the Undisputed WWE Universal Champion.

He entered the ring, after encouragement from Reigns. The ‘Tribal Chief’ mocked the former United States Champion, saying that he was too nervous to face him.

Since being drafted onto the main roster, WWE have attempted to establish Theory as one of the company’s top stars.

Although this naturally took time to develop, both company and wrestler are now seeing the fruits of their labours. Theory is an impressive talent in the ring and on the mic. With briefcase in hand, he is now effectively the biggest threat to Reigns’ titles, behind Brock Lesnar.

Theory has been established as a ‘project’ of Vince McMahon, with the 77-year-old acting as his on-screen mentor. It isn’t the first time the ex-chairman has done this, with Drew McIntyre receiving a similar gimmick during his first WWE run.

But with McMahon retired, one part of Theory’s character now needs a change. In a move that surprised WWE fans, Reigns made reference to this fact during a promo.

He said: “You need somebody to counsel you. Here – I’ll be that guy for the night, alright. Here’s some words of wisdom for you, Theory.

“I want you to start looking around. I want you to analyse this situation here. You understand? Your daddy’s not here anymore. This is my ring.”

WWE fans lapped this up, chanting ‘Who’s your daddy?’ repeatedly. Reigns tried to continue his promo, but the chants were so loud that he had to pause.

He eventually continued: “I’ll tell you who his daddy is, because if he keeps messing up the Tribal Chief, he’s gonna be his daddy.”

After Theory was on the end of a beatdown from The Usos later on in the night, the ‘Who’s your daddy?’ chants started again. He has enemies everywhere he looks, and whilst Vince McMahon may now be retired, WWE stars certainly haven’t forgotten about the former chairman and CEO just yet.