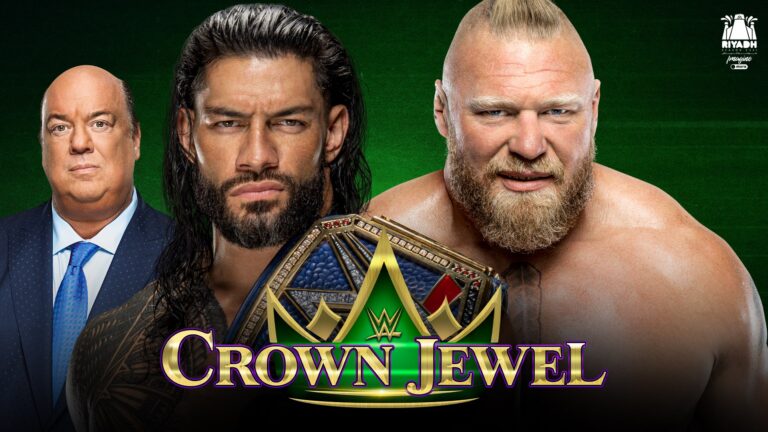 WWE Universal Champion Roman Reigns is set to take on Brock Lesnar at Crown Jewel in what is one of the most eagerly-anticipated matches of the year.

Since winning the title at Payback last August, the ‘Tribal Chief’ has successfully defended the belt against the likes of John Cena, Finn Balor, Edge and Daniel Bryan.

But the Lesnar story has created a unique level of interest amongst fans – with the presence of Paul Heyman, Reigns’s special counsel, providing a different angle. Crown Jewel will also be the first time the ‘Beast Incarnate’ has fought in WWE since WrestleMania 36 last year.

Ahead of the blockbuster bout between two of WWE’s biggest stars, Roman Reigns has spoken about the match itself, Paul Heyman and his own position as ‘Head of the Table’.

When asked about what fans can expect from the match at Crown Jewel, he replied: “I think the most obvious thing is how the roles have reversed and how the dynamic has shifted one-eighty. The direction of where each personality has been, and where it is going, all the way through to the alliance of Paul Heyman – everything has changed with me and Brock.”

“In the past Brock was probably the most prestigious Universal Champion we have had, definitely in terms of Title reign – but that pales into comparison against what I have been able to achieve in the last year and a half.”

“Being a full-time performer and being able to showcase weekly on Smackdown, and then every month, and sometimes more, being able to defend that Title on every major pay-per-view from the Big-Four down, has made a big difference to where we are both at.”

“A lot of things have changed for me and Brock – but one thing that hasn’t is our physicality in the ring. Brock has done well against me years ago, but anything recently I think I have had the upper hand – and that upper hand lies with me in so many ways.”

Reigns on being the ‘Head of the Table’

As of October 15, Reigns has held the Universal Championship for a total of 411+ days. His position as one of the top superstars in the WWE has been established over many years – and he is now the ‘Head of the Table’.

He said: “My position as the Head of the Table, the Tribal Chief, is a very busy position, especially when you have the likes of Brock Lesnar lurking and dropping in from time to time.”

“There are always going to be crosshairs on me and I will always be targeted – not only because I am the Universal Champion, but I am the face of the WWE.”

“A lot of people talk about the top guys, well if you round up all of those top guys and ask who the top, top guy is – it’s me. I’m the flag on top of the mountain.”

“I have to stay within my own process and focus and keep doing what I am doing, and let everyone else try and catch up.”

The Universal Champion also credited the impact Paul Heyman has as his special counsel – and how it gives him an advantage going into Crown Jewel.

Reigns revealed: “Paul Heyman has a very wide skillset, and there is a lot of great behind-the-scenes details he can keep in check. A lot of people don’t get to see the little things he does for a performer, so for me that is something that is now in place and it is something Brock is lacking.”

“There are so many responsibilities and tasks I don’t have to worry about now, the only thing I have to focus on is the battle plan – what is going to happen when I walk out of the curtain and defend the WWE Universal Championship – Paul has everything else covered.”

“I just have to show up and make sure the ring announcer is saying ‘and still’ at the end of the match. But that’s not the same for Brock anymore, everything falls on him.”

You can watch the WWE Crown Jewel on Thursday (October 21) at 5pm on the WWE Network.