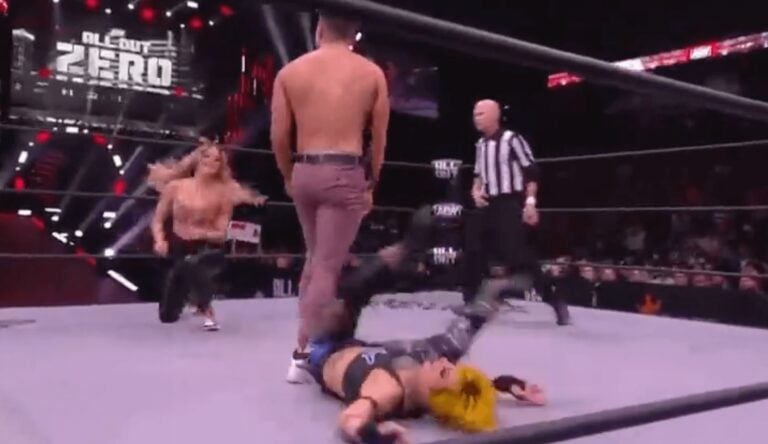 AEW star Ruby Soho sustained a serious injury after Tay Melo delivered a brutal kick at the ‘All Out’ live event.

The major PPV event made for an interesting night for wrestling fans. The thousands in attendance at The Now Arena in Hoffman Estates, Illinois, watched on in amazement as CM Punk and Jon Moxley went to battle.

The pair of sporting icons traded brutal blows for over twenty minutes, before the Chicago native successfully reclaimed his championship belt. But despite winning the contest, he spent the bulk of the press conference aiming digs at Kenny Omega and The Young Bucks.

MJF also made his long-awaited return. Meanwhile, Chris Jericho and Bryan Danielson put on a clinic.

However, there was another moment that caught fans’ attentions during the evening. But not for the right reasons.

Ruby Soho breaks her nose at AEW ‘All Out’

PPV pre-shows usually allow members of the roster an opportunity to showcase their skills. But after taking an outrageous kick, Soho may wish she’d have stayed home.

Wrestling journalist Bryan Alvarez is reporting that the 31-year-old sustained a broken nose during the Zero Hour portion of the premium event.

During an AAA Mix Tag Team Title match, the former WWE Superstar found herself on the shoulders of Sammy Guevara. Suddenly, Melo delivered a devastating kick. This resulted in Soho, formerly known as Ruby Riott in WWE, dropping several feet through the air and onto the top of her head.

But whilst the head impact looked terrifying, it was actually her nose that suffered the bulk of the damage. That injury occurred just before the end of the match, when Melo connected with another kick.

She soldiered on and completed the match. However, we are yet to find out the full extent of the injury, or when she will be back in action.