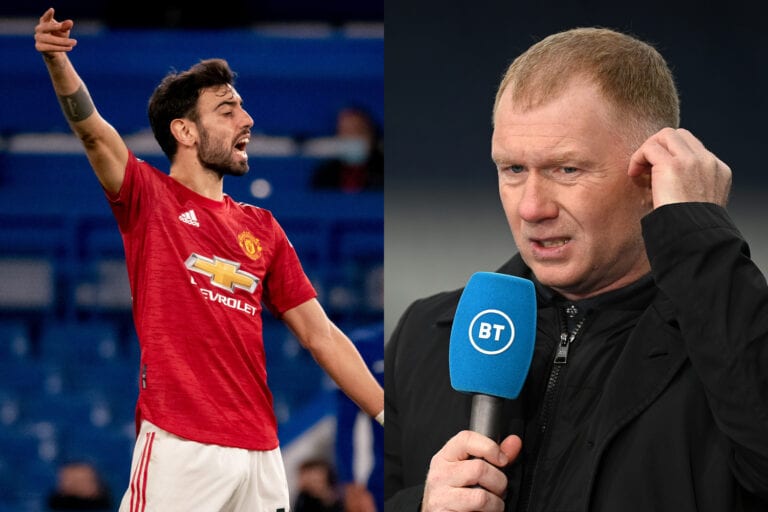 Former Manchester United midfielder Paul Scholes says that Bruno Fernandes should not be the PFA Player of the Year as the award should be given to a member of the Premier League-winning team.

The Portuguese has enjoyed a fine first full season in the English top flight so far, scoring 15 goals and providing 10 assists.

Since he joined United in January 2020, no other player in the Premier League has had more goal involvements than Fernandes (44).

But fierce rivals Manchester City are currently 15 points ahead of the second-placed Red Devils, having won each of their last 15 Premier League games.

And Scholes, who was included in the PFA Team of the Season in 2003 and 2007, says that the award winner should come from the title-winning club.

He explained to Optus Sport: “He [Bruno] should be right in the mix for [PFA Player of the Year], no doubt about that.

“But I am always a believer the best players are the players playing for the team that wins the league and there are a few City players I’d go for before Bruno.”

Earlier in the interview, Scholes discussed the influence Fernandes has on the big games.

“What he’s brought to this United team has been special,” he said.

“Ultimately, at Manchester United you are there to win titles and big games and he has to be a bigger influence than that.”

When asked about who his choice would be for the prestigious award, Scholes picked out City midfielder Ilkay Gundogan.

The German has had his greatest season in front of goal of his professional career, scoring on 11 occasions.

He has excelled in a more advanced position for Pep Guardiola‘s side this campaign, with his runs into the penalty area difficult for defenders to stop.

The 30-year-old was named the Premier League Player of the Month for January.