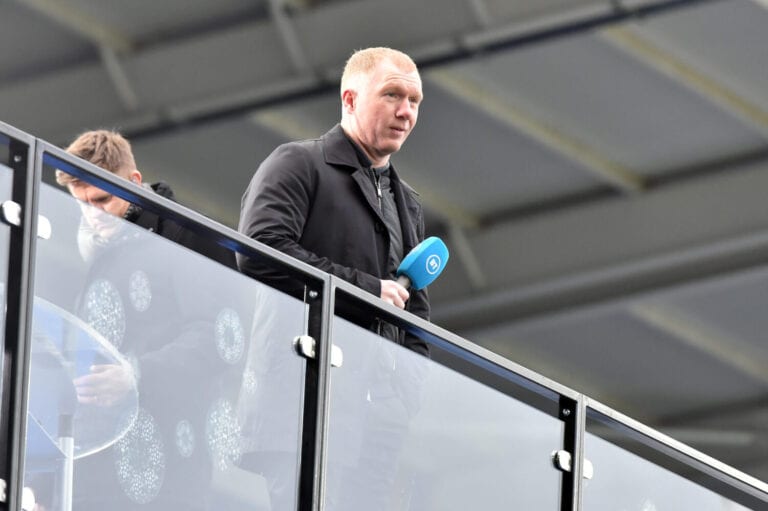 Paul Scholes has heaped praise on the impact of Fred and Scott McTominay in Manchester United‘s 2-0 victory over Manchester City on Sunday.

United produced one of their best performances in recent weeks, preventing City from extending their winning run to 22 games.

Bruno Fernandes opened the scoring with a second minute penalty after Gabriel Jesus had fouled Anthony Martial. Luke Shaw later extended United’s advantage early in the second half after a surging forward run.

They then defended superbly to blunt a City side that had not failed to score in a game since the reverse fixture at Old Trafford in December.

Scholes pointed out the key roles of Fred and Scott McTominay in stifling City’s more creative players, such as Kevin De Bruyne and Ilkay Gundogan, and paid tribute to the displays that both midfielders put in.

Speaking to Premier League Productions, he explained: “A big thing was getting the midfield right against Manchester City.

“I think they did that, Fred and McTominay had a big job but you could see how tight and compact they were, there was no space for City in there.

“Fred and McTominay won the ball and managed to break as well. It worked perfectly.

“City’s best players are obviously De Bruyne and Gundogan, so if you stop them you go a long way to stopping City.

“You have to say they didn’t really have an influence on the game.

“They [United] knew they had to keep compact, keep the middle area tight and the plan worked perfectly.”

Solskjaer says that Shaw was a pre-match doubt

Meanwhile, United boss Ole Gunnar Solskjaer praised goalscorer Shaw’s performance in the victory. He also revealed that he had to come through the warm-up in order to be passed fit to play.

In the post-match press conference, Solskjaer explained: “He was a massive doubt after the warm-up.

“He needed to do the warm-up to be cleared to play. Alex [Telles] was ready.

“Luke’s performance was top – he’s aggressive, he’s hard to play against one against one.

“When he goes forward on those runs, he’s unstoppable. He’s just improved so much and he’s improving all the time and I’m delighted for him.”