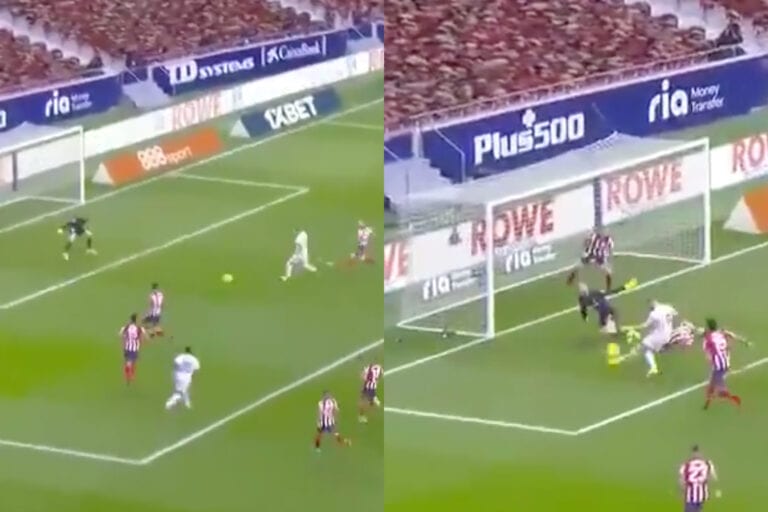 On a day of high stakes, Jan Oblak was the show-stealer in a dramatic Madrid derby on Sunday.

For a long time now Oblak has been viewed as one of the best goalkeepers in the world. Between saving Atletico in multiple games and his overall demeanour, few keepers instil confidence quite like he does.

For long spells of the game yesterday Oblak was called upon to preserve the home side’s lead. Former Barcelona star Luis Suarez opened the scoring in the 15th minute and from there, Atletico knew they had to frustrate their greatest rivals at every available turn.

Real had their moments in the first hour or so but two of the biggest opportunities fell to the feet of Karim Benzema in the 80th minute.

The Frenchman couldn’t quite poke home Vinicius Junior’s cross at the first attempt, and then after regaining his composure, he was once again left frustrated by the Slovenian goalkeeper.

If Atleti hang on for a big win, they'll have their keeper to thank ? pic.twitter.com/vLIBY0voKU

Unfortunately for Oblak and Atletico, there was nothing he could do to prevent Real snatching a last-gasp draw.

It was Benzema himself who got the last laugh after slotting home the equaliser with two minutes to go.

Another way to look at it of course, is Oblak’s double save could have been the difference between Atletico leaving with nothing rather than another valuable point.

The majority of world-class goalkeepers only seem to improve with age. Given that Oblak is still only 28, and already seems to possess the right level of maturity and discipline, it’s easy to see why he’s one of the most sought-after keepers in the game right now.

Whether or not he stays at Atletico for the rest of his career is a different story. But for now, fans across Madrid will wake up this morning with some pretty mixed emotions as the LaLiga title race heats up nicely.