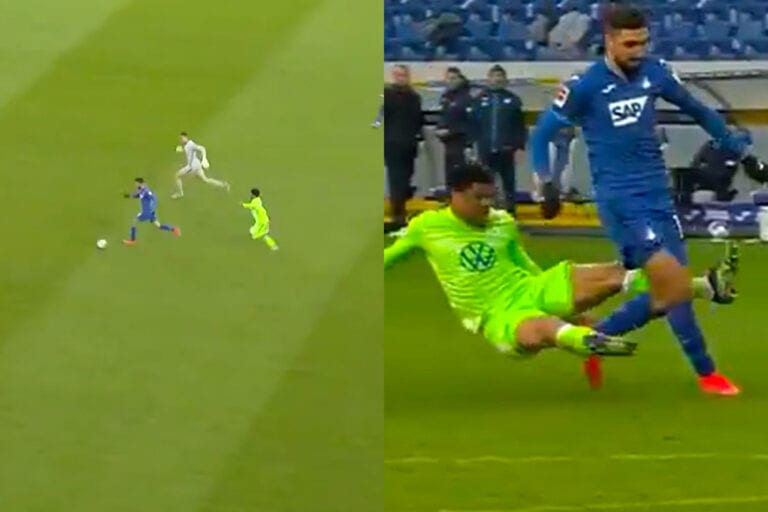 Wolfsburg defender Paulo Otavio took the ‘denying a goalscoring opportunity’ law to the absolute extreme against Hoffenheim in the Bundesliga on Saturday.

With hosts Hoffenheim leading 2-1 in the last minute of stoppage time, Die Wolfe goalkeeper Koen Casteels came up for a corner.

But the home team were able to clear, leaving forward Munas Dabbur charging towards an empty net.

Given that all he had to do was take on the shot in order to score, Hoffenheim seemed destined to wrap up the game once and for all.

Otavio wasn’t having any of it, though. Despite there being little time to mount another attack – and a definite red card and three-match ban if he connected – the Brazilian launched himself at the striker with a diving two-footed tackle. Unsurprisingly, he was indeed sent off.

The defender had already been booked on 88 minutes, but there was no doubt at all about whether to hand him a second yellow card or a straight red for this one.

“Why did he not take the shot?”

The commentator’s immediate reaction to the tackle was to question why Dabbur didn’t shoot, given that he had a open goal to aim at once he had beaten Casteels on the halfway line.

In fairness to the striker, he most likely wasn’t expecting to be taken out from behind with two feet.

And the Israeli international clearly wasn’t impressed by the ferocity of the challenge from Otavio, making his feelings perfectly clear in the clip.

The Brazilian has since apologised for the tackle on Instagram.

He said: “After the game I retracted it, apologised to whoever I thought I should apologise to.

“Although I thought I was doing the right thing in that moment, I didn’t imagine it would be that bad.”

The incident made no difference to the final result.

The 2-1 victory was an important one for Hoffenheim, who have failed as of yet to hit the sort of form recorded during recent campaigns.

Hoffe have not finished below ninth since the 2015/16 season.

They were also knocked out of the Europa League at the last 16 stage by Norwegian side Molde last month.