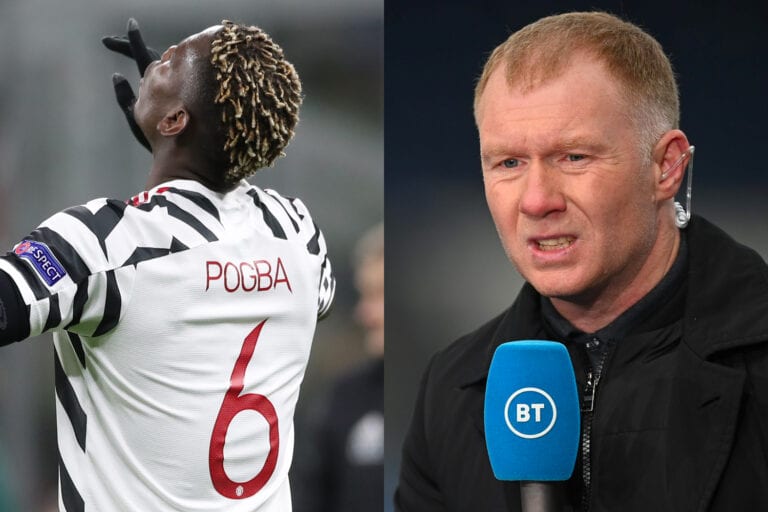 Paul Scholes has suggested that Manchester United midfielder Paul Pogba should be played on the left more often after he made a game-changing impact in Thursday’s 1-0 Europa League victory against AC Milan.

The Frenchman scored the only goal of the game just three minutes after replacing Marcus Rashford at half-time.

He finessed a cool close-range finish beyond Milan goalkeeper Gianluigi Donnarumma. It was his fifth goal of the season in all competitions.

The 1-0 result was enough to send United through to the quarter-finals of the competition via a 2-1 aggregate scoreline.

It was the first game Pogba had featured in for the Red Devils since February 6. He had missed the intervening period as a result of a thigh injury.

Scholes says that the 28-year-old could feature more often in a left-sided role going forward.

Speaking on BT Sport (quotes via Pundit Arena), he explained: “Maybe that position takes a little bit of defensive responsibility away from him.

“It depends who’s fit. I do like Martial or Rashford on that left-hand side I must admit, but he’s got every bit as much quality as them, probably more quality.

“With the two holding midfielders, it gives him the license to be free in that position.

“I think it could be a position for him.

“When he played for Juventus, that was his best position, on the right or left-hand side of a three and we all know the football he produced in that team.”

Pogba “made a big difference” – Solskjaer

Looking ahead to the remainder of the season, he added that the Frenchman’s return will be a “big boost” to the team.

The Norwegian told BT Sport: “He’s been out for almost two months, and of course any team would miss a player like Paul Pogba.

“He was just getting into his best form, and he’s very important for us.

“He’s going to give us a big boost for the rest of the season, and today he made a very, very big difference for us.”

United are next in action on Sunday when they take on Leicester in the FA Cup quarter-finals.

They sit in second place in the Premier League, 14 points behind leaders Manchester City with nine games to play.