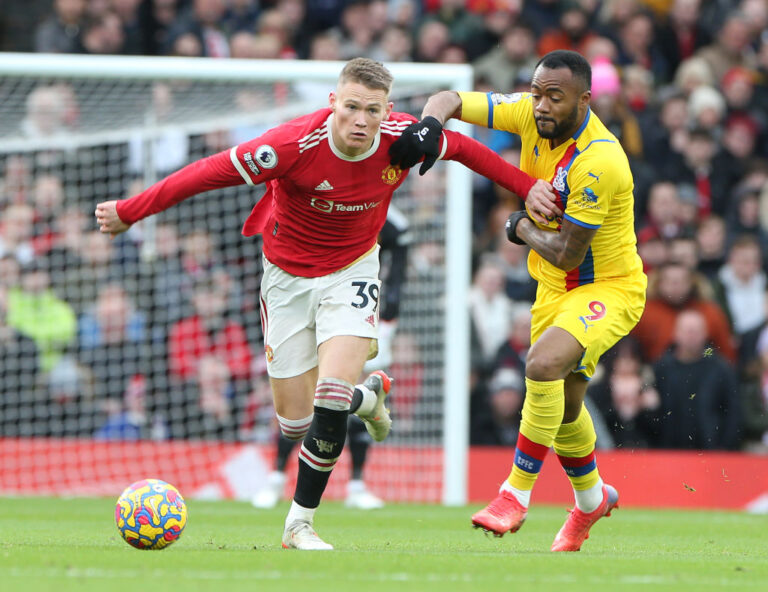 Ralf Rangnick has to cast his expert eye over the current Man United squad before assessing whether he needs reinforcements. It puts players under the microscope, which may cause some to become tense.

Their livelihood is under threat. Media speculation about transfers must create stress for players adjudged to be underperforming. Perhaps that explains the awkward moment in Scott McTominay’s recent interview with Sky Sports.

The Scotland international sat down with the broadcaster to discuss life in the early days of the Rangnick era. However, much of the interview focused on McTominay’s troubles on the pitch this season.

‘Too many square passes’

Scott McTominay was already displaying body language that suggested he was uncomfortable. Scratching the back of one’s neck is usually a subconscious way of self-soothing during insecure moments. McTominay does this when defending how he trains and his efforts during matches.

Although McTominay hasn’t shone for United this season, few in a red shirt have due to the difficulties encountered at the club in recent months. We have seen McTominay perform at higher levels in previous campaigns.

A better indication of his actual quality would be to look at performances for Scotland. WhoScored give McTominay better average ratings in FIFA World Cup and UEFA Nations League matches than in his Champions League and Premier League outings.

A question about Rangnick’s comments following the Crystal Palace game pushed McTominay to interrupt the reporter.

The reporter said: “Just one more on the manager because after the Palace game, he said if he had one criticism of you and Fred, it would be that there were too many square passes-“

McTominay: “I think he said one.”

A now slightly flustered reporter: “..one, yeah. He said one-“

A dagger-eyed McTominay: “Not ‘too many’.”

It was an awkward exchange which you can watch below.

What did Rangnick actually say, though?

Following the 1-0 win over Crystal Palace last weekend, Rangnick mainly took positives from the outing. However, the coach is not afraid to speak openly about negatives and highlights those he wants to eradicate.

One such negative after Palace was minor and involved McTominay.

Read: Scott McTominay explains what it was like playing with Zlatan Ibrahimovic.

In quotes reported by the Daily Mail, he said: “If you play the way that we played today, with regard to intensity, being on the front foot, playing very proactively, and having four offensive players ahead of Scotty and Fred – with Jadon, Bruno, Cristiano and Marcus – it’s highly important that you have players who are very disciplined, who are proactively aggressive against the ball.

“And both Scotty and Fred are almost perfect defensively on that. They did one or two or three mistakes, especially in the first half. There were two square passes – one from Scott, one from Fred.

“I don’t like those kinds of balls in midfield in those positions. But overall, when the other team is in possession of the ball, both Fred and Scotty, they are almost perfect for that kind of football.”

There you have it. Scott McTominay was right. He’s getting a bit of flak on social media for correcting the interviewer, but he wanted to shut down the misinformation. Rangnick would be proud of how quickly he pressed him.