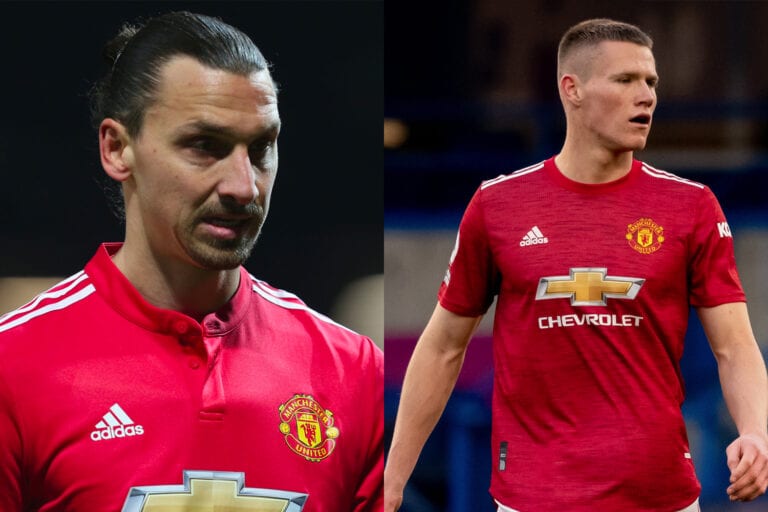 Manchester United midfielder Scott McTominay has described Zlatan Ibrahimovic as a “ruthless guy” who “made life hard” for teammates that were not on the same page as him.

McTominay played with the Swedish international at United between 2017 and 2018.

The Red Devils take on the 39-year-old’s current club AC Milan in the Europa League on Thursday. Ibrahimovic is set to miss the first leg, however, through injury.

It will be the first time the two sides have faced off since 2010, when United won 7-2 on aggregate at the Champions League last 16 stage.

In an interview with UEFA, McTominay explained what it was like to work and play alongside Ibrahimovic at Old Trafford.

He said: “[He was] ruthless. I’m not going to say too much more than that.

“Good professional, worked hard, [he was a] big, big presence in the dressing room in terms of his voice and the way that he is with people.

“If you’re not on the same page as him, then you won’t succeed under him, he’ll make life hard for you.

“So, you’d better work hard at winning, otherwise it’ll be a tough time for you.

“He’s obviously had a legendary career which is a real credit to him and obviously to his family as well.”

Ibrahimovic still at the top of his game

After leaving United, Ibrahimovic spent time in the United States with Los Angeles Galaxy, scoring over 50 goals inside two seasons.

He then rejoined Milan in December 2019, and has led the line superbly this season.

Despite missing several games as a result of injury and testing positive for COVID-19, the Swede has hit 14 goals in 14 Serie A appearances this campaign.

In February, he reached the milestone of 500 club career goals.

That will to win obviously remains exactly the same.