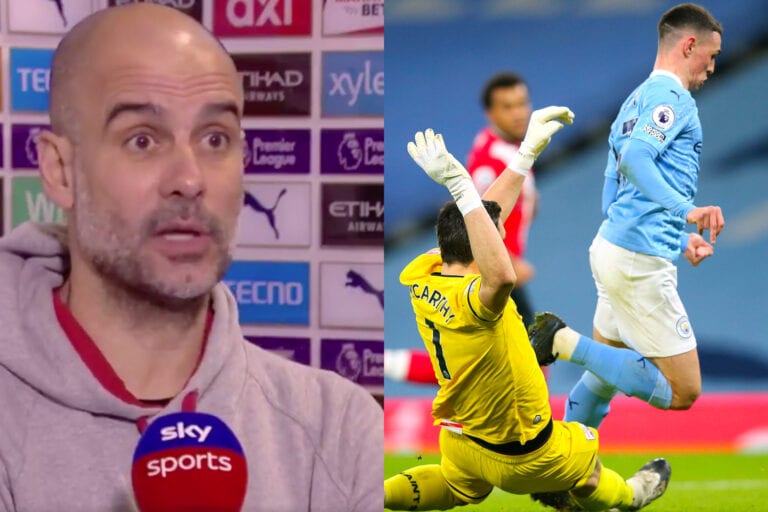 Manchester City manager Pep Guardiola described the VAR decision not to award a penalty for a foul on Phil Foden during their 5-2 win over Southampton on Wednesday as “in-cred-ible”.

The two sides were locked together at 1-1 when the incident occurred, after an entertaining opening 35 minutes at the Etihad.

Kevin de Bruyne opened the scoring for City, before James Ward-Prowse equalised for the Saints from the penalty spot.

But another example of VAR controversy was to come when Foden raced clear on goal and tried to round Saints stopper Alex McCarthy.

McCarthy, who slid in to try and tackle the ball, made clear contact with the City midfielder, but after a slight stumble, Foden was able to return to his feet.

Some replay angles suggested that the ‘keeper may have got a touch of the ball, but the contact with Foden came first.

But fans immediately raised question marks as to whether the spot kick should have been given.

VAR deemed the decision by referee Jon Moss not to award a spot kick as not a “clear and obvious error” – something that Guardiola clearly didn’t agree with in his post-match interview.

He also referenced several other contentious incidents involving the technology in recent weeks.

Speaking to Sky Sports, the City boss said: “I don’t understand why Fulham disallowed the goal against Tottenham.

“I don’t understand the hands from Arsenal vs Burnley. Another example is the penalty today.

“Jon [Moss] cannot see it, but the VAR is there, they don’t whistle the penalty, it’s incredible.”

Pep Guardiola was baffled over a VAR decision at the Etihad on Wednesday night pic.twitter.com/vMogAJqWaD

“For a long time, maybe four or five years, never complain about the referees, but this action really is in-cred-ible. In-cred-ible.

“The VAR exists for when the referee don’t see the action, they can make a mistake, that’s why they review.

“But if there is a review and they didn’t whistle the penalty for this action, I don’t understand. Honestly. The same with Fulham and Arsenal.”

Despite the contentious VAR decision, City restored their lead soon after through Riyad Mahrez, before Ilkay Gundogan made it 3-1 before half-time..

The goals and the overall performance was the perfect response to City’s defeat in the Manchester Derby last weekend.

The result puts them 14 points clear of second-placed Manchester United in the Premier League, having played a game more.