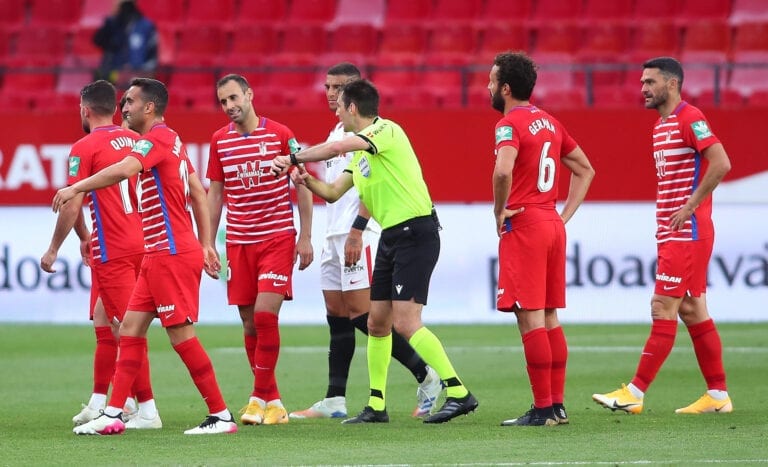 Sevilla defeated Granada 2-1 in LaLiga on Sunday to keep their title hopes well and truly alive.

Julen Lopetegui’s side are now just three points behind league leaders Atletico Madrid in the table – although third-placed Barcelona could go top by a point if they win their game in hand.

Ivan Rakitic gave the Rojiblancos the lead from the penalty spot. Lucas Ocampos then added a second goal after half-time.

Granada then halved the deficit from a penalty of their own, with Roberto Soldado scoring from the spot.

But the main drama came in stoppage time.

A minimum of four minutes were added on by referee Ricardo de Burgos. However, to everyone’s surprise, he blew the whistle with only three minutes having been played.

He was quickly surrounded by Granada’s players, who protested the decision.

The referee then realised his error, and summoned both teams back onto the pitch.

And whilst some players were ready to kick off immediately, others, including Sevilla defender Marcos Acuna, had to put pieces of kit back on before play could resume.

When the game did restart, Granada weren’t able to force home an equaliser, meaning Sevilla secured a vital three points to secure Champions League qualification for next season.

“We all make mistakes” – Lopetegui

Sevilla manager Lopetegui said there was confusion after the referee had blown his whistle for the first time, but admitted that everyone makes mistakes.

He said via FirstPost: “There was a problem with the watch or something like that.

“It was a strange situation, with a lot of confusion.

“But I don’t want to put it in the news. It happened, we all make mistakes.”

Granada manager Diego Martinez, meanwhile, said that the stoppage time and subsequent resumption hurt his team, but accepted that the referee tried to rectify his mistake.

“They make mistakes like we all do and he tried to rectify it,” he said.

“Although it did hurt us because we were chasing a goal and the dynamic wasn’t there.”

Los Palanganos are next in action next Monday when they host Athletic Bilbao, before they then take a trip to take on title rivals Real Madrid at the Alfredo di Stefano Stadium.

Granada’s next fixture, meanwhile, is against Barcelona on Thursday.