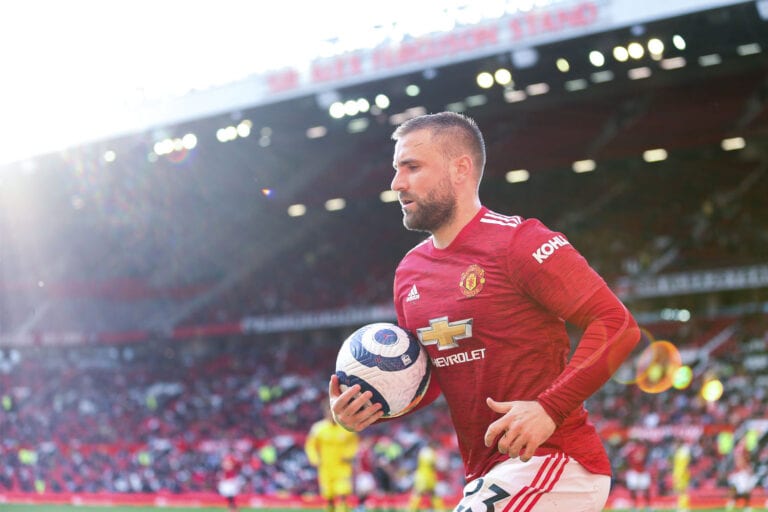 Luke Shaw has offered to help a Manchester United fan who says he faces a three-year ban after throwing a scarf onto the pitch during last night’s game against Fulham.

It was the first time fans were allowed back in to Old Trafford since March of last year, with 10,000 in attendance.

But one fan was ejected from the stadium after throwing a green and gold scarf on to the pitch, close to where Shaw was taking a corner.

Green and gold were the colours United wore in the 19th century when they were known as Newton Heath, with the ‘green and gold movement’ a rebellion against the Glazer family’s ownership of the club.

United fan Shaun Logan posted on Twitter after the game that he threw the scarf in a “good manner” and that Shaw laughed.

He posted: “Was thrown to Luke in a good manner. Nothing aggressive.

“Was told by the Stewards I’m facing a three year ban. All paid up for Gdansk [Europa League final] next week and this looks like it could be the end of the road for me.

“Was a peaceful gesture that was taken out of context. Luke Shaw laughed…”

Shaw has since responded to Logan, explaining that he understood the actions and would “try my best” to help the fan avoid the ban threat.

He said: “I understand completely, first match back at Old Trafford, emotions are high.

“I know there was nothing aggressive towards what you did. I will try my best to speak with someone and sort it out.”

On the pitch, United were unable to claim the three points as the fans returned to the ground, despite Edinson Cavani’s superb 40-yard lob in the first half.

Joe Bryan equalised for already-relegated Fulham, and the game ended in a 1-1 draw.

Chelsea’s victory over Leicester means that Ole Gunnar Solskjaer’s side are guaranteed to finish second in this season’s Premier League.

They take on Villarreal in the Europa League final on May 26 in Gdansk.