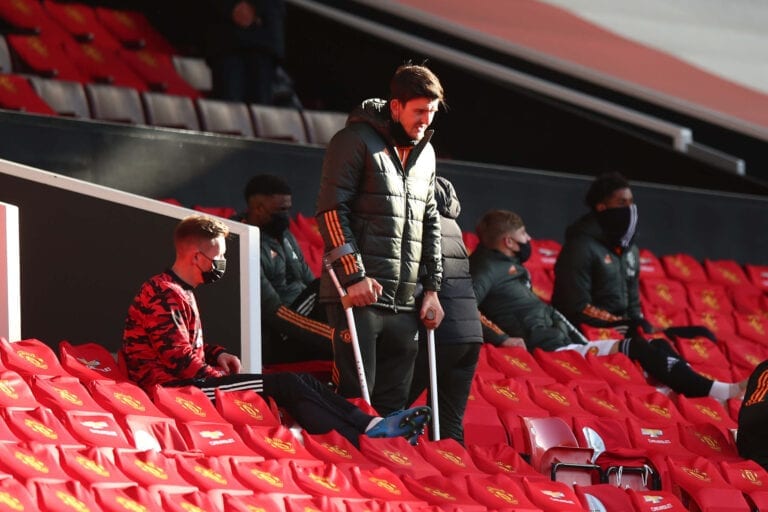 Harry Maguire’s race to be fit for Manchester United’s Europa League final showdown with Villarreal is looking less like one he can win.

United’s captain suffered ankle ligament damage during his side’s 3-1 win over Aston Villa on May 9. With the final just one week away, recovering in time was always going to be a big ask.

Ole Gunnar Solskjaer had been relatively positive about Maguire’s chances, though sounded less optimistic last night after watching his side draw 1-1 with already-relegated Fulham.

“Harry, we are working on. It doesn’t look great,” admitted Solskjaer.

Maguire himself also spoke about his injury in his column in the matchday programme.

“Basically, he (Villa player Anwar el Ghazi) just fell on me and put all his weight on me and I ended up twisting my ankle,” he said

“It wasn’t a muscle injury, so it was a bit unfortunate and very frustrating.

“I was very disappointed on the night and the day after, but I’ve come to terms with it. I’ve got to be positive. I’ve got to look forward and make sure when I’m ready to come back that I’m fully fit, raring to go and can pick up where I left off.

“It’s such an exciting game to be involved in. I’m sure everyone is dreaming of winning that final or scoring the winner.”

Losing Maguire would be a huge blow for United heading into the club’s only chance for silverware this season. Both Scott McTominay and Fred both suffered injuries during last night’s draw too, leaving Solskjaer with a potentially huge headache in terms of his defensively-minded players.

There’s also the added concern for Maguire that the Euros kick off in less than a month. Most fans would likely be in agreement that he remains a nailed on starter for Gareth Southgate alongside John Stones.