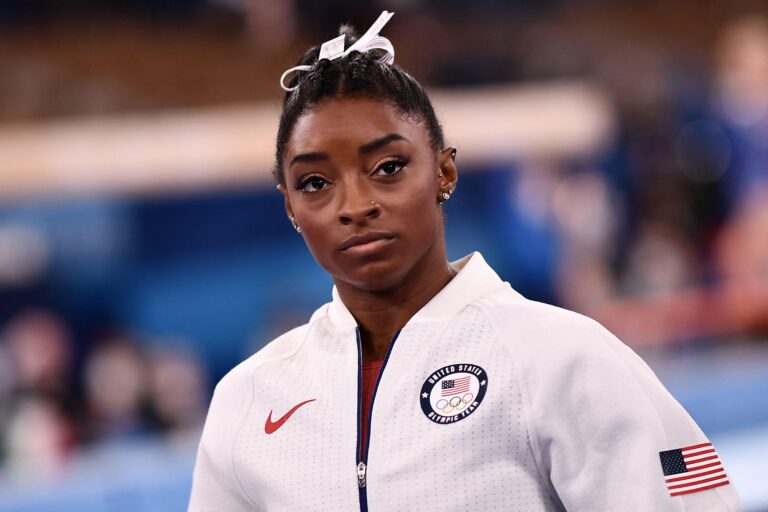 US gymnast Simone Biles will participate in the balance beam final at Tokyo 2020 on Tuesday, USA Gymnastics has said.

The event is one of six finals that she qualified by progressing through the preliminary rounds.

The 24-year-old, who has won a record 24 gold medals in gymnastics, withdrew from the team final last Tuesday after performing one vault.

She explained afterwards that she had to “focus on [her] mental health”.

“We have to protect our bodies and not just go out and do what the world wants us to do,” she said.

“We’re not just athletes. We’re people at the end of the day and sometimes you just have to step back. I didn’t want to go out and do something stupid and get hurt.”

Subsequently, she pulled out of the women’s all-around, vault and uneven bars finals.

Biles later explained on her Instagram that she has been suffering from “twisties” – saying that her “mind and body are simply not in sync”.

Posting a video of her attempting a routine on the bars, she wrote: “This was not happening before I left the USA.

“It randomly started happening after prelims competition the VERY next morning.

“By that time NO an alternate was not allowed to be placed in my position for you “know it alls”.

“We have four on a team for a reason. I chose to not continue team competition in jeopardizing losing a medal (of any colour) for the girls/US. Also for my own safety and health.”

USA Gymnastics have now confirmed that Biles will compete in the balance beam final on Tuesday.

They posted on Twitter: “We are so excited to confirm that you will see two U.S. athletes in the balance beam final tomorrow – Suni Lee AND Simone Biles!! Can’t wait to watch you both!”

Biles won the bronze medal in the same event at Rio 2016, behind US team-mate Laurie Hernandez and Dutch gymnast Sanne Wevers.

Jesse Lingard says he thought about taking a break from football

Why everyone should still be excited for the Tokyo Olympics

Jesse Lingard says he thought about taking a break from football

Why everyone should still be excited for the Tokyo Olympics