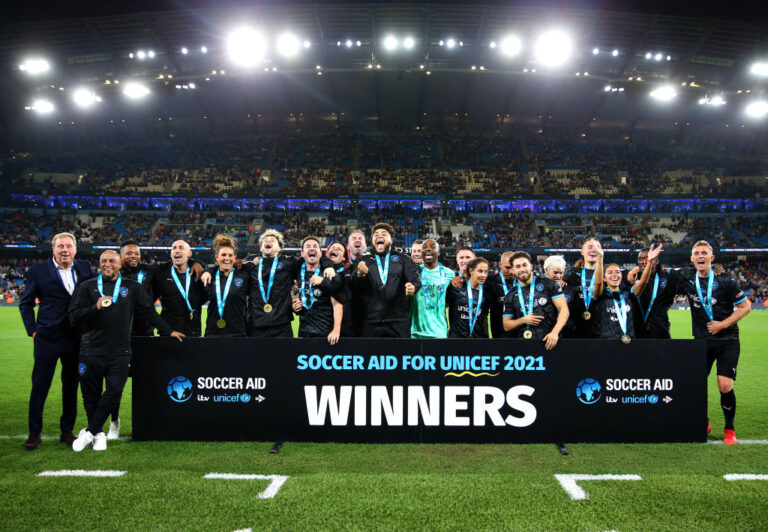 The annual Soccer Aid charity match takes place this weekend, and we’ve got all you need to know ahead of the event, including the start time.

Soccer Aid returns for its annual footballing extravaganza. It features stars of football past and present, and big names from popular culture.

The match is played to raise money for the children’s charity UNICEF, which works to aid disadvantaged children across the world. Last year, the event raised £13 million for charity. That was a record amount since Soccer Aid began.

Soccer Aid was founded in 2006 by former Take That singer Robbie Williams and his close friend Jonathan Wilkes. It was initially a bi-annual event. Soccer Aid is now an annual competition.

It has attracted some legendary names from football. They include Wayne Rooney, Diego Maradona, Zinedine Zidane and Ronaldinho.

Soccer Aid 2022 promises to be another action-packed evening. Here’s all you need to know:

It will be played at the London Stadium, the home of West Ham United, for the first time.

Soccer Aid 2022 will be broadcast live on ITV. The build-up to the event will begin at 6:30pm. Viewers can also watch the broadcast via the ITV Hub.

UNICEF UK Ambassador Dermot O’Leary will once again anchor the action. TV and radio presenter Maya Jama will co-present, whilst former Arsenal and England star Alex Scott will be pitchside before, during and after the match.

As is customary with Soccer Aid, players will be interviewed by Scott on the sidelines during the game.

This year, Soccer Aid will once again feature an England XI taking on a Rest of the World XI.

Here are the two squads in full:

Rest of the World XI

Tickets are still available for the event at the time of writing. They can be purchased via the SEE Tickets website. Adult tickets are priced from £20, with child tickets priced from £10.