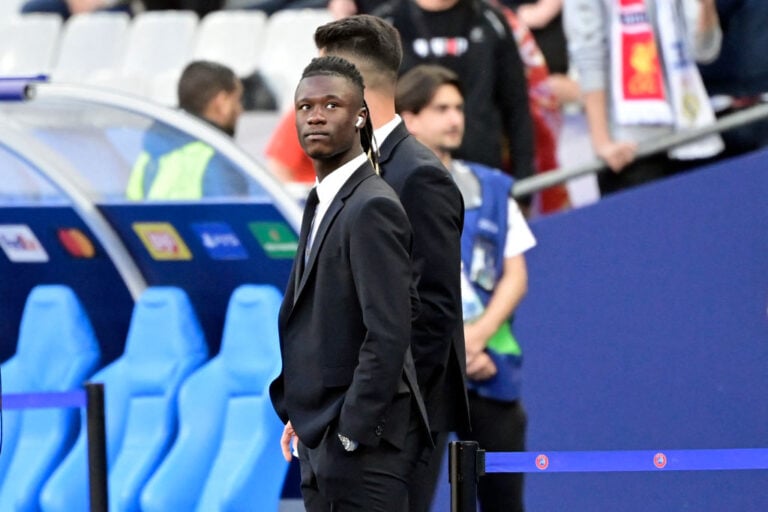 Eduardo Camavinga led a classy gesture from the France Under-21s as they gave a gift to the Ukraine team.

Ukraine’s national sides are only just beginning to play matches again. This set of fixtures is the first that they have been able to play since Russia invaded their country. For the under-21 side, this has meant jumping into crucial qualifiers for the 2023 U21 Euros, which will take place in Georgia and Romania.

Impressively, Ukraine U21 have put in some great performances. For instance, in their first game back, they swept aside the Faroe Islands 4-0. Just four days later, they beat North Macedonia by the same score line.

Yesterday, Ukraine took on an incredibly talented France Under-21 side. In a breathless encounter which had five first-half goals, the Ukrainians fought back from behind to claim a 3-3 draw. As a result, France sealed their place in next summer’s tournament by winning Group H. Meanwhile, Ukraine stay second, giving them a play-off spot.

The return to competitive play for their nation has proved a very emotional time for Ukraine’s teams, who have received widespread support from the football world. After the game, the French side gave their opponents a gift in appreciation of their difficult situation.

A video from after the game shows the classy move from the France squad.

Real Madrid’s midfielder led the French team into the dressing room to hand the shirts over. Then, in a very classy move, Edouardo Camavinga said they were a present for the Ukraine players. Additionally, he briefly addressed their squad to express hope for Ukraine’s situation.

“This is the shirt for all the people,” said the midfielder, via talkSPORT. “We know the current situation is not OK and very complicated, so this is a present for everyone from all the team.

“We hope the situation will be better for you soon.”

Clearly touched by such a thoughtful gesture, the Ukraine dressing room gave Eduardo Camavinga and the French team a round of applause.

Similarly, fans on social media praised the Champions League winner for his part in the kind action.

Responding to the video, which is currently circulating on Twitter, a fan complimented the 19-year-old for his thoughtfulness: “So classy man, respect to him,” one user commented underneath.

Further spreading the video around the platform, another fan re-tweeted the clip whilst singing the praises of the Frenchman.

Finally, one person signified the French team’s great display of unity with their fellow players.

“What a great sign of respect by Eduardo Camavinga and the whole U21 French side,” wrote the user.